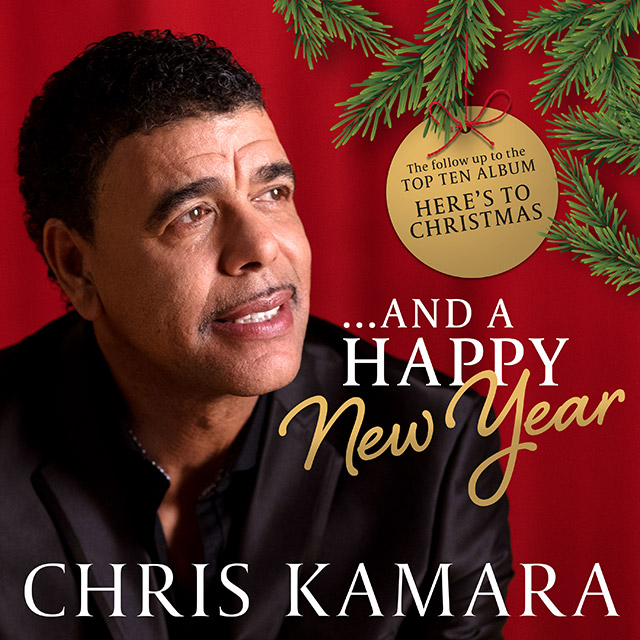 LABEL: SO WHAT? RECORDINGS / SILVA SCREEN RECORDS
Kammy’s back – Just in time for Christmas! With new album ‘…And A Happy New Year’, the follow up to his 2019 album ‘Here’s To Christmas’
Purchase NOW
Official Store
Amazon
Apple Music
Spotify
Watch the video to the first single ‘I Wish It Could Be Christmas Everyday’ featuring Wizzard’s Roy Wood:
Watch the video


…AND A HAPPY NEW YEAR

Chris ‘Kammy’ Kamara has released the first single from his brand new album – a swing and big band cover of Wizzard’s ‘I Wish It Could Be Christmas Everyday’ – featuring Roy Wood.
The ubiquitous hit ‘I Wish It Could Be Christmas Everyday’ has continued to re-enter the charts every year for the last decade, including Top 10 last year.   ”I’m absolutely over the moon to share the first taste of music from my new album ‘… And A Happy New Year’. We arranged this version of ‘I Wish It Could Be Christmas Everyday’ and asked Roy’s blessing to cover the track in this way – not only did he give it, but he asked to do an intro for the track too! What an Unbelievable honour!”
The track is the first taste of music from Kammy’s second album ‘… And A Happy New Year’ which will now be released on 4th December 2020, following on from the unprecedented success of his debut last year.
Kammy’s new album ‘…And A Happy New Year’ continues his swing and big band sound, featuring Xmas standards such as ‘White Christmas’, ‘In The Bleak Midwinter’, and ‘Blue Christmas’.
The album will also feature two brand new tracks: ‘Mr Claus’ and ‘Happy New Year’, written for Kammy (who celebrates his birthday on 25th December!) by Richard Scott and Kelvin Andrews, who have also written for Robbie Williams amongst others.
‘…And A Happy New Year’ was recorded with the same musicians who appeared on Kammy’s first album, ‘Here’s To Christmas’ – an 18 piece big band. However whilst recording under COVID restricted and distanced rules, each section was recorded of different days (rhythm one day, brass the next, etc), whilst remote recording for the strings took place in Sofia, Bulgaria. For the majority of the musicians it was the first time they had been in a recording studio for over 6 months.

On the album, Kammy says:

“I was blown away by the reception to ‘Here’s To Christmas’, and when I was asked to record another I just had to! I hope that with ‘… And A Happy New Year’, especially in this year, I can help give people a little bit of festive cheer, and something to sing-along to.”
Whilst Kammy’s singing may have taken some by surprise, associating him more with being a star of Saturday afternoon and Saturday evening TV, the reception for his croon on last year’s ‘Here’s To Christmas’ was unanimous. Glowing reviews, a social media frenzy describing him as “Britain’s Bublé”, and front-pages backing him in the race for Xmas No.1, all led incredibly to a Top 10 album.
On Here’s to Christmas, the Press Association commented “Pick up your lounge suit, Rat Pack longings and chilled out vibes. Middlesbrough-born Chris Kamara has delivered a smooth, big band swing album that is pure class.”
Born in Middlesbrough, Kammy began his career as a tough-tackling midfielder for clubs such as Brentford, Stoke, and Leeds, before moving into management. His irreverent style and infectious enthusiasm in analysing matches for Sky Sports’ Gillette Soccer Special on Saturday afternoons reporting live from matches has seen the nation take him to their heart as a national treasure. He also presents the primetime ITV show Nina Warrior UK, and regularly appears as a guest on entertainment and panel shows.

1. I Wish It Could Be Christmas Everyday
2. I Believe In Father Christmas
3. In The Bleak Midwinter
4. Dear Mr Claus
5. White Christmas
6. The Christmas Song
7. Blue Christmas
8. O Come, All Ye faithful
9. We Wish You A Merry Christmas
10. Happy New Year