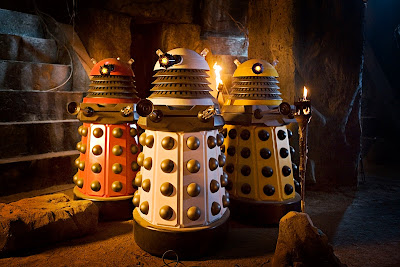 Silva Screen is proud to announce the February album release of the soundtrack to Doctor Who – A Christmas Carol, this year’s Doctor Who Christmas Day Special.

The soundtrack features classical music superstar Katherine Jenkins. Katherine is both part of the cast and singer on “Abigail’s Song”.

The music is composed by now Doctor Who composer of choice Murray Gold and performed by the excellent BBC National Orchestra of Wales and Crouch End Festival Chorus.

The album will be released both physically (SILCD1360) and digitally (SILED1360).

The TV episode will be broadcast on Christmas Day at 6pm and will feature Matt Smith as The Doctor, Karen Gillan as Amy Pond and Arthur Darvill as Rory Williams. They will be joined by Michael Gambon as Kazran Sardick and Katherine Jenkins as Abigail.

Amy and Rory are trapped on a crashing space liner, and the only way The Doctor can rescue them is to save the soul of a lonely old miser, in a festive edition of the time-travelling adventure, written by Steven Moffat. But is Kazran Sardick, the richest man in Sardicktown, beyond redemption? And what is lurking in the fogs of Christmas Eve?