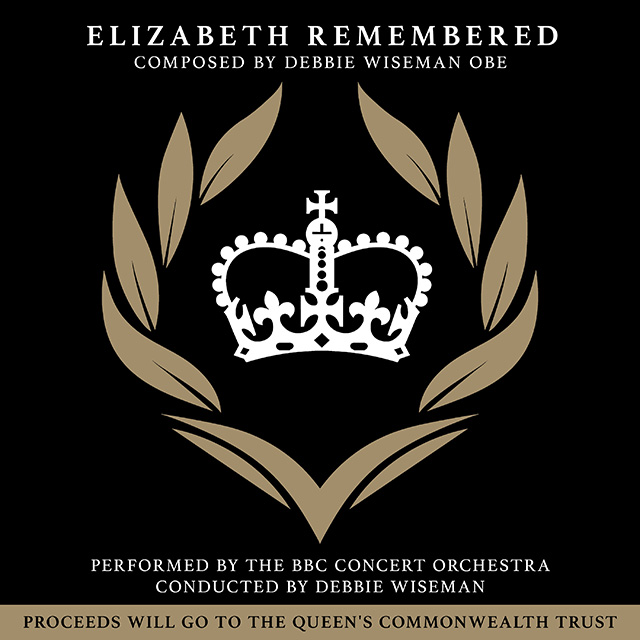 Stream/Download Now“Elizabeth Remembered” is a charity single with all proceeds going to the Queen’s Commonwealth Trust.


Silva Screen Records is proud to announce the release of the charity single ELIZABETH REMEMBERED in aid of The Queen’s Commonwealth Trust, performed by the BBC Concert Orchestra and composed by Debbie Wiseman OBE.
The sublime piece, performed by the BBC Concert Orchestra, was composed by Debbie Wiseman OBE.
This tender and contemplative piece of music was played many times during the BBC’s live coverage of the ceremonies across 10 days of national mourning; and the full 3-minute piece was played at the end of the Queen’s State funeral, following Kirsty Young’s emotional final words, and accompanied by a poignant and beautiful montage of images from the events of the day.
After the broadcast, the BBC and Debbie’s website and social media were inundated with requests for the music.
“Glorious music for the end of an era”, “Love it! So respectful of the occasion.”, “you absolutely captured the nation with this”, “I have never been moved by a piece of music more, thank you, it was just perfect”, are just some of the online comments, with many asking where they could buy the recording.
Due to this unprecedented demand, Debbie Wiseman, together with Silva Screen, has taken the opportunity to release the music as a charity single with all proceeds going to one of Her late Majesty’s treasured charities – The Queen’s Commonwealth Trust.

The award-winning composer and conductor Debbie Wiseman OBE is one of the UK’s most successful female music ambassadors with over 200 film and TV credits, including Wolf Hall, A Poet In New York, Edie and Dickensian. Debbie is Classic FM’s Composer in Residence and was voted the nation’s most popular living composer in this year’s Classic FM Hall of Fame.
Debbie was the composer, musical director and co-conductor of the 2022 Platinum Jubilee Celebration, A Gallop Through History. A 75-piece Tri-Service orchestra and a cast of thousands from across the Commonwealth entertained the Queen in the grounds of Windsor Castle. In 2012, as part of the Diamond Jubilee River Pageant, Debbie was one of eleven composers commissioned to write new Water Music, and conducted an on-board orchestra travelling down the River Thames on a barge as part of a 1,000-strong flotilla. Debbie also composed the Overture and Finale for The Queen’s 90th Birthday Celebration at Windsor in 2016.
Her latest 3 albums – The Glorious Garden, The Mythos Suite, and The Music of Kings and Queens, all went to number 1 in the UK Classical Chart.