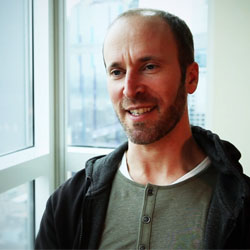 Murray Gold is a modern-day, innovative composer. From his BAFTA nominated score to Vanity Fair through to his consistently well crafted pieces for the BBC’s Doctor Who. Born in Portsmouth in 1969 he has since relocated to New York where he now lives and works.

Recently Tara Clark flew to New York to ask Murray about his life and his music on behalf of Silva Screen Records. Here is a taster of Murray’s replies, but play the video to get the full story:

Did you watch Doctor Who as a child; did the music have an affect on you?

Do you have a favourite piece that you have composed for the scenes?

“It might be Dooms Day actually, just because that was the first one that really got, I mean  in that there is a fan base and that was the one that made peoples ears prick up a little bit”

Who has the most influence on your composing?

“Probably, Ennio, Morricone and Danny Elfman and then David Bowie. You know their all very melodic and sort of a Danny Elfman’s  idea of a Gothic sort of Orchestra in Batman 87, that was a really good sound and of course his fantasy stuff”