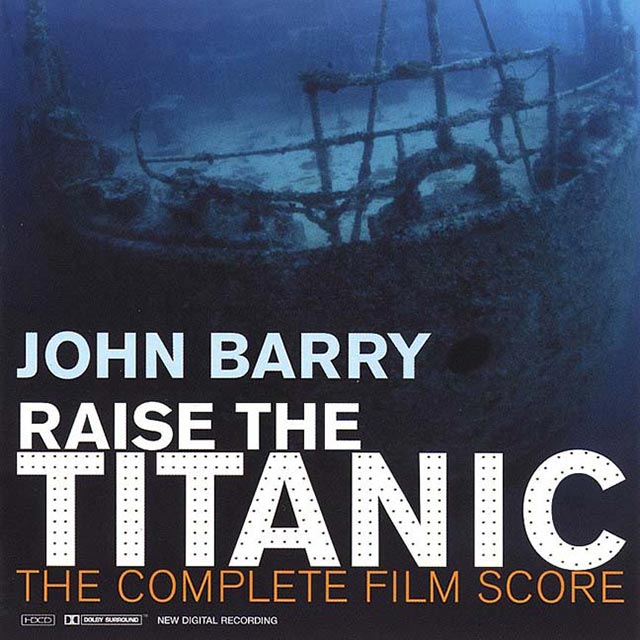 World premiere recording of the Complete Score from the Lord Grade Film starring Jason Robards, Richard Jordan, David Selby, Anne Archer, & Alec Guinness
Raise The Titanic was filmed in 1980, and although expensively mounted, at an estimated $40 Million, the production retrieved only $7 Million in receipts on its initial release. The dismal box-office response, fuelled by universally poor critical reaction, seems justified; the film, despite being ambitious and professional, failed to ignite the explosive elements of the original novel by Clive Cussler.
However, composer JOHN BARRY’s elegant music for RAISE THE TITANIC has cruised on to plaudits and kudos, his musical score recognised as a prime example of the film composer’s art.
Over the past 19 years Raise The Titanic has not only been one of the “most requested” of john barry’s unrecorded scores but one of the most requested scores of all time!
All 50 Minutes of the Score has been reconstructed, orchestrated and Conducted by Nic Raine. The accepted John Barry ‘expert’, having worked as Barry’s arranger and orchestrator for the past 15 years and having conducted 4 Albums of Barry’s Music for Silva Screen
Performed by THE CITY OF PRAGUE PHILHARMONIC
This album was more recently released on vinyl. Click here to learn more >
1. Prelude
2. Main Title / The Mine Shaft
3. The Sicilian Project / Dog Attack
4. The Sicilian Defence / Southby / The Mountain Comes To Us
5. We’re In Business
6. To Cornwall / All That’s Left (Memories Of The Titanic)
7. Deep Quest / Flood!
8. Finding The Cornet / Spy On Board / The Smoke Stack
9. The Titanic Uncovered
10. Gene Explores The Titanic / Deep Quest Trapped
11. Rescue Attempt / Blowing The Tanks
12. Raise The Titanic / Deep Quest Saved
13. Memories Of The Titanic
14. Russian Threat / The Titanic Enters New York Harbor
15. “Thank God For Southby” / In The Graveyard / End Titles
Email:
info@silvascreen.co.uk