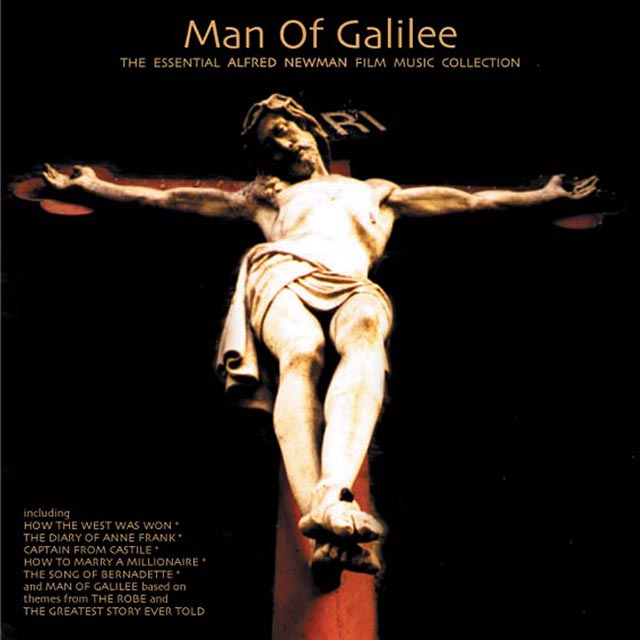 ALFRED NEWMAN (1900 -1970)
Alfred Newman can claim to be one of the originators of the art of film music. With the coming of sound-film Hollywood appropriated Alfred Newman from the Broadway musical stage to quench the industry’s newly acquired thirst for orchestral accompaniment – with Newman rapidly recognised as one of film music’s greatest exponents. He realised the possibilities inherent in scoring movies, and through experimentation developed basic techniques still in evidence today. Working variously for Samuel Goldwyn Productions and the RKO studio the eager young composer and arranger soon graduated to heading the music epartment at Twentieth Century Fox. He remained at the peak of his adopted profession from 1930 until his untimely death in 1970, creating more than one hundred and fifty original scores and arranging and supervising the music for many dozens of musicals. Composed in a grandly symphonic idiom and always alive with potent melodic invention, Alfred Newman’s music is particularly typified by divided strings, often muted, the playing expressed via generous vibrato – a technique which glances nostalgically back to an earlier era of European music.
His compositions also often exude telling modernistic tonalities , with the extraordinary amalgam of vintage, contemporary, and even avant-garde musical modes resulting in a uniquely blended musical style ideally suited to enhancing the dramatic properties of film.
Alfred Newman is the head of that remarkable Hollywood Clan of Composers, Songwriters and Arrangers that include LIONEL NEWMAN, RANDY NEWMAN, DAVID NEWMAN and THOMAS NEWMAN


THE MAN FROM GALILEE
America is a nation struck from the very rock of religious freedom and Hollywood has always recognised an indigenous desire for films on divine or spiritual subjects. THE ROBE(1953), starring Richard Burton and Jean Simmons, sought to examine the early influences of Christianity following the martyrdom of Jesus and pitted the fledgling sect against the pagan tyranny of repressive Rome. THE GREATEST STORY EVER TOLD (1965) was more ambitious, intelligently and piously presented ; an amalgam of Gospel stories in telling the life of Jesus of Nazareth, here sensitively portrayed by the Swedish actor Max Von Sydow in his English language debut. Alfred Newman impressively scored both films, although he had to entertain certain artistic tribulations whilst composing for THE GREATEST STORY EVER TOLD in order to complement director George Stevens exacting musical requirements. To fashion that score’s complex choral arrangements Alfred Newman engaged his colleague and friend Ken Darby – and it was following Newman’s untimely death in 1970 that Darby determined to arrange some of the choice thematic material from the scores for THE ROBE and THE GREATEST STORY EVER TOLD into a cantata celebrating the life of Jesus. Although Ken Darby had inevitably to adapt Alfred Newman’s original compositions and devise his own selections linking the Newman thematic material – most specifically many of the sequences for baritone and contralto – in the main the scoring remains true to Alfred Newman’s original intentions when composing for the two notable films. Whilst the cantata proudly stands as a bone fide concert composition it is nevertheless interesting to note the derivations of the various chapters. The vigorous opening stanza is featured in THE ROBE, and details the daring rescue of the Christian slave Demetrius from a Roman prison – although this composition rightly originates in Newman’s score for the 1939 version of THE HUNCHBACK OF NOTRE DAME , underscoring Quasimodo being pursued through the Paris streets. The plaintive yet soon intensely rising melody comprising “The Promise Of The Holy Spirit” has its basis in the love theme from THE ROBE. The ecstatic strains of “Rejoice” reflect Jesus’ triumphant entry into Jerusalem, again, as featured in THE ROBE, whilst the plaintive invention of the initial section of “The Great Journey” is derived from the main title music for THE GREATEST STORY EVER TOLD, with the following joyous exultation originally Alfred Newman’s vision of Palm Sunday for THE ROBE. “Miriam’s Song ” is featured almost precisely as it is in THE ROBE, and performs the same function – a telling of Jesus’ rising from the tomb. “Sunrise Of The Third Day ” reinstates the glorious Hallelujah which Newman originally composed for the Resurrection of Jesus in THE GREATEST STORY EVER TOLD and which was replaced on the film soundtrack with the Hallelujah Chorus from Handel’s Messiah.
DISC ONE
1. 20th Century Fox Fanfare And Cinemascope Extension
2. How To Marry A Millionaire – Street Scene
3. The Diary Of Anne Frank – Overture
4. The Diary Of Anne Frank – Live In Hope
5. The Diary Of Anne Frank – The First Kiss
6. The Diary Of Anne Frank – Persecution / Finale
7. The Mark of Zorro
8. Anastasia – Main Theme
9. The Song Of Bernadette – Overture
10. How The West Was Won – Prelude / The Land
11. How The West Was Won – Cleve And His Mule – Scherzo
12. How The West Was Won – Intermezzo
13. How The West Was Won – Cheyenne Attack And Aftermath / Finale
14. How The West Was Won (Choral version)
DISC TWO
1. Captain From Castile – Conquest
2. Keys Of The Kingdom – Overture
3. Nevada Smith – Main Title
4. The Razor’s Edge, The – Main Title
5. The Razor’s Edge – Seduction
6. The Razor’s Edge – India
7. Wuthering Heights – Cathy’s Theme
8. Man Of Galilee – Prologue
9. Man Of Galilee – The Promise Of The Holy Spirit
10. Man Of Galilee – Rejoice
11. Man Of Galilee – The Great Journey
12. Man Of Galilee – Miriam’s Song
13. Man Of Galilee – Sunrise Of The Third Day