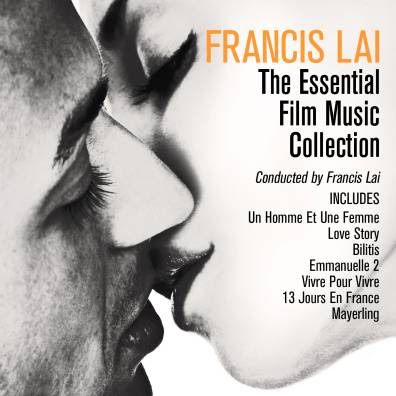 Yes, you heard it here first folks: Silva Screen is releasing FRANCIS LAI – THE ESSENTIAL FILM MUSIC COLLECTION and seeing as it is some of the most romantic film music ever written, what better time than February to release it, just in time for Valentine’s day?

1. 13 Jours en France
Theme from the 1968 Claude Lelouch/Francois Reichenbach documentary about the Grenoble Olympics. Aka ‘Challenge in the Snow’.

2. Bilitis
Theme from the 1977 David Hamilton film about a young woman’s summer of self discovery. Starred Patti D’Arbanville.

8. La Belle Histoire
Lai goes Latin for this bizarre Claude Lelouch film from 1992 in which the lives, loves and losses of several characters are portrayed in tandem with those of their former incarnations during the time of Christ.

10. Le Lecon Particuliere
Yet more extra-marital angst as Nathalie Delon stars as a married woman who becomes entangled in a love affair with a teenage boy.

11. Le Genre Humain
A return to form for Lai and Lelouch, as they revisit themes and colours from their earlier work. Aka ‘Le Courage d’Amour’.

12. Le Passager de la Pluie
Charles Bronson stars in this René Clement thriller about a US Army Colonel on the case of a ruthless sex attacker. Aka ‘Rider On The Rain’.

14. Les Misérables
Claude Lelouch takes on Victor Hugo’s original story alongside that of a modern day man influenced by the famous tale of Jean Valjean.

15. Les Ripoux
Director Claude Zidi’s film about a ‘Bad Cop’ who makes good when he’s given a new partner to keep him in line.

16. Pour L’amour de Tes Yeux Noirs
Theme from 1987 romantic drama by Nikita Mikhalkov which sees Marcello Mastroianni star as a man retelling his tale of love to a fellow passenger on board ship.

17. Love Story
Lai’s now legendary theme for ‘the’ Hollywood romance of the 1970s… Ali McGraw and Ryan O’Neal star as the young lovers overcoming the odds and familial prejudices to be together.

18. Mayerling
Terence Young’s 1968 take on the famous ‘murder-suicide’ story concerning Crown Prince Rudolf of Austria and his lover, Baroness Mary Vetsera, who were found dead together at the royal family’s hunting lodge in 1889. Omar Sharif and Catherine Deneuve star.

19. Un Homme et Une Femme
This light, easy pop theme has become one of Lai’s most famous and it was his first for a major film. The music serves the almost wordless story of ‘A Man and a Woman’, who find each other but can’t love each other, perfectly.

20. Vivre Pour Vivre
A love story, albeit another affair, framed by the events of the Vietnam War. Yves Montand stars as the womanising War reporter, alongside a young Candice Bergen.