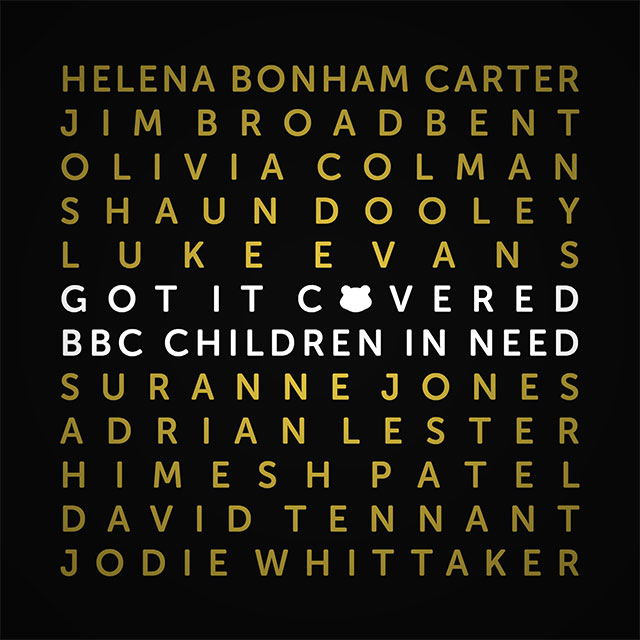 Purchase Now
More Info
BBC One and BBC Children in Need announce the launch of Children in Need: Got It Covered, a brand new venture for 2019 which involves some of the UK’s biggest names from stage and screen as they band together to produce an entire album of cover songs, whilst helping to make a positive difference to the lives of disadvantaged children and young people throughout the UK.

A special 60-minute programme will follow the entire recording process and explore all the behind-the-scenes action, as the actors face the challenging task of laying down their bespoke tracks at the legendary recording studios Rak and Abbey Road Studios in London. Each of the actors will handpick a song that is most significant to them and receive expert guidance from Brit and Mercury award-winning record producers and songwriters Guy Chambers and Jonathan Quarmby.
Renowned vocal coach Mark De-Lisser will also be at hand to assist the actors with producing their tracks. The programme will also shine a light on the projects funded by BBC Children in Need, with a selection of the actors visiting projects to see first hand the difference their support will make to young lives.

Words From Those Involved

Mel Balac, Executive Producer and Creative Director at BBC Studios, says: “Many of the actors have said trying to nail the role of recording artist has been their most challenging role yet. The personally curated playlist that is being created in aid of Pudsey will be big on musical surprises and laughs, while highlighting the fantastic charities and causes BBC Children in Need supports. Bring on the drama!”
Kate Phillips, Controller, Entertainment Commissioning for the BBC, says: “I’m delighted and so impressed by the outstanding array of actors who have agreed to step out of their comfort zones and help raise money for BBC Children in Need. Every year we are truly inspired by the extraordinary support we receive from thousands of people and we know this year will be no exception.”
Tommy Nagra, Director of Content at BBC Children in Need, says: “We are thrilled that this amazing line-up of acting talent are giving up their time to come together and create something quite unique for this year’s BBC Children in Need appeal. Their musical efforts will help make a difference to the thousands of disadvantaged children and young people we support across the UK and leave a lasting impact beyond this TV special. A huge thanks to everyone involved.”
Polly Dooley, Executive Producer at 20four7films, adds: “Shaun Dooley and I are immensely proud to be working with BBC Studios and Silva Screen Records, bringing Britain’s best-loved actors and record producers together to create a unique and exciting album and programme. The unbelievably generous outpouring of goodwill from all involved will no doubt raise lots of much needed funds for BBC Children in Need.”

The programme will be broadcast on BBC One ahead of the annual BBC Children in Need Appeal show. The album, in aid of BBC Children in Need, will be released in conjunction with Silva Screen Records and is set to be released later in the year.
Children in Need: Got It Covered is a co-production by BBC Studios and 20four7films. It has been commissioned by Charlotte Moore, Director, BBC Content and Kate Phillips, Controller, Entertainment Commissioning. The Commissioning Editor for the BBC is Rachel Ashdown. The executive producers are Mel Balac and Polly Dooley and the director is Peter Coventry.

BBC Children in Need relies on the generosity and creativity of the thousands of supporters and fundraisers who raise millions of pounds for the charity every year. To date, the UK public has raised over £1 billion for children and young people facing disadvantage across the UK.