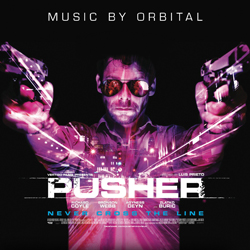 Silva Screen is pleased to announce that they will be releasing the Orbital penned soundtrack to “Pusher” in October this year.  The film sees Richard Coyle as the East End drug dealer (Frank) out of his depth when his get rich quick scheme backfires and leaves him owing a ruthless drug lord a large amount of money.  As Frank goes on a desperate quest to repay Milo (played by Zlatko Buric) before time is up, the violence escalates over the course of a week and events spiral out of his control.  Stylishly directed by Luis Prieto and also starring supermodel Agyness Deyn, Orbital’s music provides the perfect catalyst, igniting the fast-moving action as it shifts through the streets and clubs of London’s gritty underworld.

“Working on Pusher was a great opportunity to create a score that draws on both moody thriller styles and dance music in equal measures. Full of anthemic film noir moments. Brilliant.”
– Paul Hartnoll (Orbital)

Orbital released an album earlier this year, “Wonky”, their first for several years and have been in the news recently for their performance at the opening ceremony of the Paralympics, where they performed Ian Dury’s “Spasticus Autisticus”.

“Pusher” will be released on CD and Digital Download on the 8th of October.