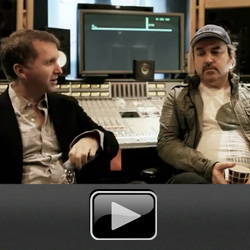 For the Sherlock fans, Silva Screen has uploaded exclusive footage of composers David Arnold and Michael Price talking about their work on the BBC hit series’ soundtrack.

Intelligent, funny and thrilling, the music has already received BAFTA and Emmy nominations and won an RTS Television Award.

With over 7.5m viewers watching the first episode, the BBC One season of three Sherlock Holmes films was the big summer hit of 2010. Starring Benedict Cumberbatch (Small Island) in the title role and Martin Freeman (The Office) as Dr. Watson the stories cleverly bring Conan Doyle’s famous characters into the world of modern day London. A second series of three episodes is currently being shown on BBC One.

Here’s a snippet from the interview…

How did working on series 2 differ from series 1?

Michael: Once there was a basic language there. That everybody felt comfortable with after the first series. What was brilliant this time was because each of the episodes got a really distinctive visual style. We I think, could really, stretch this time and do something very specific for each episode. Which was and has been brilliant, so the first ones sort of, not really romantic but its suddenly sort of deeply deeply emotional. A lot, of very pent up emotion and then hounds which was from us quite harsh and electronic and distorted. We really trying to bring some quite contemporary sounds to the table and then the last one, is just like heart breaking.

How does music for TV differ from music for cinema?

David: It’s a very intimate medium, you realise that you’re in people’s houses. You know at the cinema people go out and they pay usually quite a lot of money to sit in a dark room with hundreds of people and have this shared experience. You can get quite elated by that and its an extraordinary experience and a unique experience. With television it’s like, especially with this kind of episodic thing, it’s like every week, you know. People make a kind of appointment with it, you know they kind of look forward to it and they share it with their family in a way that they don’t with anything else. It’s a really fascinating medium in a way… that’s what I like about it more than anything. Obviously, Sherlock is a brilliant piece of writing and performing art and directing art as well.

Watch the interview HERE to find out more…