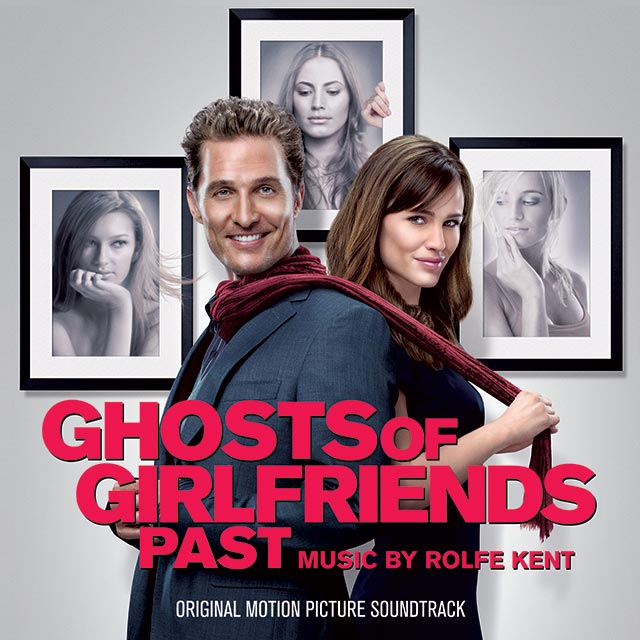 From the composer of About Schmidt, Sideways, Legally Blonde, Election and Mean Girls comes the soundtrack to ‘Ghosts of Girlfriends Past’, a romantic comedy starring Matthew McConaughey
Not just a romantic comedy score, the album also offers drama, as part of Rolfe’s approach was to get the characters down in music, to give them musical motifs. This led the way to large textural pieces (Conjuring the Ghost of Future) and dark moments (Graveside Epiphany) as well as mischief and jazzy swing (Uncle Wayne’s theme).
Rolfe Kent has written music for over 40 feature films including the Golden Globe and Critics’ Choice nominated score for Sideways. In 2007, Kent received an Emmy Award nomination for Outstanding Main Title Theme Music for hit Showtime series ‘Dexter’.
Of the scoring experience on Ghosts of Girlfriends Past Rolfe Kent says: “For me Ghosts of Girlfriends Past was an opportunity to do some big dramatic symphonic things; the story has some real drama to it, and lots of motion. I loved working on it”
1. Opening Title
2. Kaiko Shoots Arrow
3. Jenny and Connor Meet and Spar
4. Uncle Wayne’s Room
5. Uncle Wayne’s Apparition
6. Jenny and Connor; Wedding Sex
7. Ghost of Girlfriend Past
8. The Swings, Young Jenny
9. Ignoring Jenny
10. Why Woo When We Can Do?
11. Leaving Before Dawn
12. Bar of Women
13. Of Cork and Cake
14. A Little Honesty
15. Ghost of Girlfriend Present
16. Pauly’s Theme
17. Rain of Tears
18. Conjuring the Ghost of Future
19. Panic At The Wrong Wedding
20. Graveside Epiphany
21. Connor Believes, But Too Late
22. Pain Beats Regret
23. Best Man Speech
24. Jenny and Connor in the Snow
Email:
info@silvascreen.co.uk