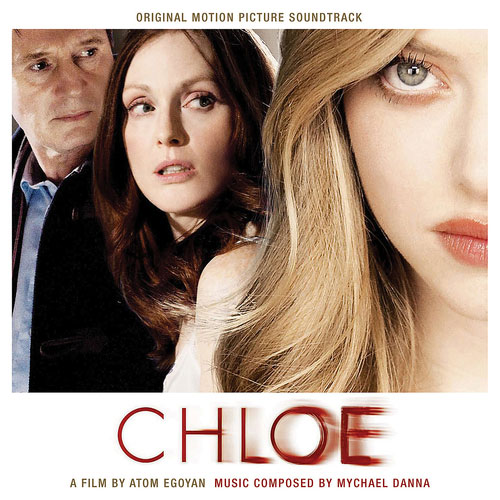 Mychael Danna’s rich evocative score to Atom Egoyan’s sexually charged melodrama.
Director Atom Egoyan’s “composer of choice”, Mychael Danna has penned the music for a number of Egoyan’s films – Exotica, The Sweet Hereafter, Felicia’s Journey, Ararat, Adoration and in Chloe, they successfully team up again. Starring Julianne Moore and Liam Neeson, this cleverly constructed film manages to bring together all ingredients of a potential hit while remaining true to Egoyan’s style.
Screen Daily comments: “In the early stages of the story, Egoyan does flavour the film with a sense of intrigue and mystery that Hitchcock brought to such late career masterpieces as Vertigo and Marnie. The comparison is underlined by the lush, Bernard Herrman-style score from Mychael Danna.”
Recently released Mychael Danna scores on Silva Screen include The Imaginarium of Doctor Parnassus and Little Miss Sunshine.
Mychael Danna has been at the vanguard of film scoring for over 20 years and his easily recognisable sound combines non-Western sound sources with orchestral and electronic minimalism. Danna has also scored films for acclaimed directors such as Ang Lee, Scott Hicks, Mira Nair and Joel Schumacher and his previous scores include The Ice Storm, Vanity Fair, 8MM, Capote, Monsoon Wedding, The Nativity Story and The Time Traveler’s Wife.
1. In My Line Of Business
2. People Like You
3. Chardonnay
4. When Did We Stop?
5. I Felt Him
6. Shower
7. You Look Just Like Her
8. Windsor Arms
9. The First Time
10. Conservatory
11. Touch You
12. Have This
13. Waiting Room
14. Do You Want To Count It?
15. Don’t Want This To Be Over
16. Told You Not To Call
17. She Was Nobody
18. This Person
19. Your Parent’s Room
Email:
info@silvascreen.co.uk