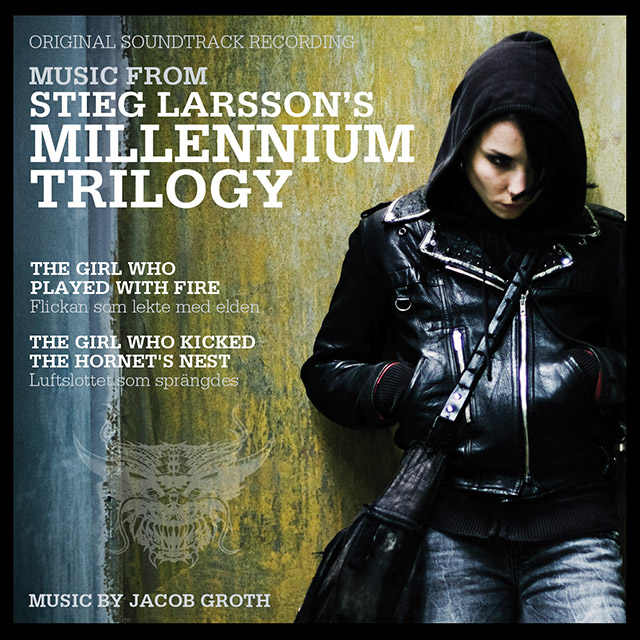 Jacob Groth’s dark and sinister orchestral score to Stieg Larsson’s cult Millennium Trilogy detective Saga.
“Groth’s music manages to deliver an imaginatively bleak experience of its own that sounds primal and poetic in equal measure.” – BBC (Michael Quinn)
The late Swedish author’s mega-selling gruesome crime novels featuring the dysfunctional dark heroine Lisbeth Salander, have captured the imagination of fans and have become a publishing sensation worldwide.
The Silva Screen Records release contains themes heard throughout all three films but principally, the album features the soundtrack to the second and third film and includes the theme used for the full-length TV versions. It also features the end credit Goth-rock song ‘Would Anybody Die For Me?’, specially remixed for the album and performed by Danish singer Misen Larsen as featured in the second film.
Jacob Groth is the most celebrated film composer in Denmark and the music for Stieg Larsson’s ‘Millennium’ trilogy was an international breakthrough for him.
Of Groth’s music in The Girl With The Dragon Tattoo, Movie Music UK says, “it is exciting when it needs to be exciting, moving when it needs to be moving, sinister when it needs to be sinister, and has a sound and quality which indicates that Groth should have been discovered by the world at large a long time ago.”
1. MILLENNIUM (MAIN TV THEME) 3.08
2. BLOMKVIST 4.34
3. WOULD ANYBODY DIE FOR ME? (VERSION 2) 3.24
4. THE SCHEME 4.26
5. RUNNING OUT OF TIME 3.03
6. FIRE 2.13
7. ABUSE 4.37
8. MORE SECRETS – PALMGREN 3.42
9. ZALA COLLAGE 3.53
10. THE RETURN OF SALANDER 5.32
11. ANOTHER GOODBYE 2.23
The Slovak National Orchestra
Conducted by Allan Wilson
Email:
info@silvascreen.co.uk