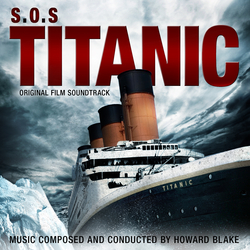 S.O.S. TITANIC is arguably the most intelligent and authentic version of the Titanic tragedy. An Anglo-American co-production premiered by ABC on September 23rd 1979 it ran for three hours and was the costliest television film ever made.
A huge star cast included David Janssen, Helen Mirren, Ian Holm, David Warner, Harry Andrews and Cloris Leachman. The brilliantly-researched script by James Costigan was based on a first-hand account by passenger-survivor Lawrence Beesley.
US-based producer Roger Gimbel wanted to use an English composer and had been much impressed by Howard Blake’s score for Ridley Scott’s THE DUELLISTS. Apart from the composition of a serious symphonic score there was also the intention to create a tapestry of historically-correct music such as that which would have been heard on the ship. An innovation in the story-telling portrayed the differences between 1st, 2nd and 3rd class passengers and this was also to be reflected in the music – with, for instance, Irish music from the 3rd, songs with piano from the 2nd and a sophisticated orchestra in the 1st.

Howard Blake is one of the most popular and prolific living English composers. Successes include scores which he wrote for films such as ‘The Duellists’ and ‘A Month in the Country’, both of which won prizes.  In 1982 he wrote words and music for the animated Channel 4 TV film and Sony CD ‘The Snowman’, with its song ‘Walking in the Air’, so much loved by children all over the world. Its concert version continues to receive many performances worldwide, and the stage version runs every year at Sadlers Wells’ Peacock Theatre in London.  In 1994 Howard Blake received the O.B.E. for services to music and is Fellow and Visiting Professor of Composition at The Royal Academy of Music.