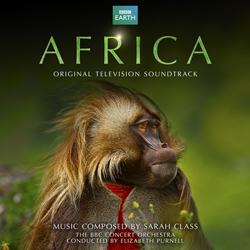 Download the digital booklet
Label Store
Amazon
iTunes / Apple
Spotify
The latest BBC landmark natural history series, four years in the making, launched in the UK in January with 6.5m viewers for episode one with the corporation planning sales in over 200 territories worldwide. As with Life On Earth and Frozen Planet, music is integral to the production for the emotionally charged scenes of nature at its best and worst. Emmy-nominated,composer, singer, songwriter Sarah Class is one of the UK’s most sought after composers. Her credits include many TV and film productions that include The Meerkats, State Of The Planet With Mark Knopfler (Emmy nominated), Animal Forensics (RTS nominated) and Trial & Retribution. She also worked as a writer and arranger on Hayley Westenra’s worldwide smash album Pure.
1. Journey of the King Fish
2. Rivers and Falls
3. Lakes and Flamingos
4. Butterfly Ball
5. Force of the Whale
6. Mystery Path
7. Giraffe Vs Giraffe
8. Beauty of Aguillus Sands
9. Leopard Mirage
10. Bats and Eagles
11. By The Beach
12. Bangweulu Swamp
13. The Desert Victor
14. Up in the Clouds
15. Lions and Lizards Rock Café
16. Baptism of Fire
17. Fairy Circles
18. Bull Elephant Fight
19. Shimmer of the Flower Fields
20. Drought
21. Under the Stars
22. Rwenzori Mountains
23. Shores of Respite
24. Draconsberg
25. Plight of the Turtles
26. River of Life
Email:
info@silvascreen.co.uk