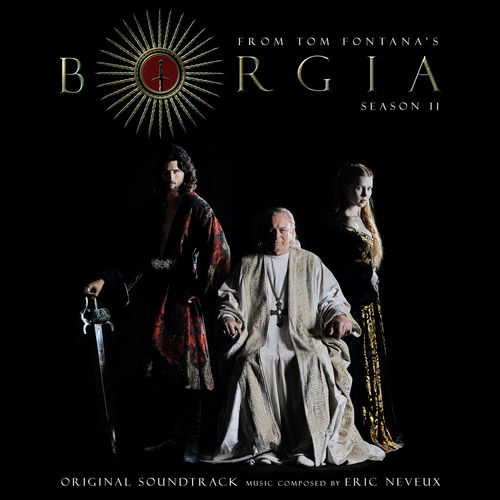 Created by Emmy award winning writer Tom Fontana (Homicide: Life On The Street, Oz) and starring John Doman (The Wire, Damages), Borgia is the story of the dynasty that rose to hold sway over the whole world. Set in a cauldron of intrigue, violence, murder, lust, politics, faith, incest, betrayal and redemption the series can be seen in close to 90 territories including the UK and US. Composer Eric Neveux has credits on 70 film and TV productions which include a long working relationship with director Patrice Chéreau, providing the scores for his critically acclaimed Intimacy and Persécution.
“Eric Neveux has created a score that is, at once, subtle yet powerful, reverent yet original, operatic yet intimate. He has contributed mightily to our goal of bringing the fullness and truth of the Borgia family to heart-thumping life” – Tom Fontana – creator of Borgia
1. Borgia – International Main Titles
2. March to War
3. Our Families
4. All The Men In My Life.
5. The Cardinals – Sancia’s Temptation
6. As Cold As Iron
7. Villa Catanei – After The Storm
8. Ghosts
9. You Don’t Know Me (Carlotta’s Theme) – The Apostolic Palace
10. Lucrezia – Villa Farnese
11. Cesare’s Return
12. Then You Kiss Me
13. Governor Of Spoletto
14. The Foundation of the Earth – The King of Naples
15. Return Of The Good Fortune
16. God Provides
17. The Pope’s Dream
18. As A Conqueror
19. Becoming A Mother, Soon
20. Fire With Fire
21. The Will Of God
22. Bonus Track: Borgia – Main Titles (French Version)
Email:
info@silvascreen.co.uk