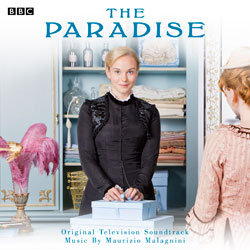 Download the digital booklet
Adapted from the classic French novel by Emile Zola, The Paradise was the most watched autumn TV drama last year across its first five episodes with an average of 5.9m viewers. The series has been recommissioned for a second series later this year. Set in the first department store in the 19th century North East of England it’s the story of the life and loves of the staff and their customers. Maurizio Malagnini brings cinematic class to television with his elegant soundtrack performed by the BBC Concert Orchestra, the composer praising their efforts in delivering, “a true soul to the score”. Italian born Malagnini graduated from The Royal College Of Music in 2008 and was acclaimed as a “prodigious talent”. Previous work includes BBC productions Muddle Earth and The Body Farm and his symphonic suite Running In The Clouds broadcast on Radio 3.
1. The Paradise Lovebirds
2. The Portrait
3. Children Arrive At The Paradise
4. Impossible Love
5. I Will Ruin You
6. Reception Waltzer
7. Opening The Doors
8. We Will Never Know
9. Denise Is Entering The Paradise
10. Shopgirls
11. Trailer And End Credits
12. I Have Married The Wrong Man
13. Sam Is Innocent
14. Miss Paradise Pink
15. Pauline’s Theme
16. Miss Audrey And Ladieswear
17. Perfume From Morocco
18. Sam Could Lose Everything
19. Audrey And The Baby
20. Denise And Moray
21. Lord Glendenning Owns Everything
22. Miss Audrey Is Unwell
23. The Dark Lake And Jonas
24. Katherine And Moray
25. The Wedding Veil
26. You Are Mine
27. The Hope For Love
28. Denise And Moray Are Falling In Love
29. The Final Kiss
Email:
info@silvascreen.co.uk