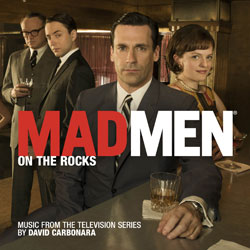 Download the digital booklet
In June 2013 the Writer’s Guild Of America voted on their greatest TV shows of all time. In amongst the legendary shows in the top 10 that include The Sopranos, Seinfeld, The Twilight Zone and MASH nestles a series just six years old. Mad Men, based around the trials and tribulations of a New York ad agency in the 60s stands as a colossus of contemporary television with two BAFTAS, three Golden Globes and fifteen Emmys to its name. Highlighting contemporary songs from the period the series also has a distinctive musical voice courtesy of composer David Carbonara. His winning mix of contemporary score and period jazz defines the series in the same way as its production design and costume. His long career includes scores for Spanking The Monkey and The Guru and extensive work as a music editor which includes Cop Land, The Ciderhouse Rules and Chocolat. “Mad Men is the greatest TV drama of all time, and it’s not even close. Mad Men is to TV what The Godfather was to the movies.” – Rolling Stone
1. Pacific Coast Highway
2. The Man With The Miniature Orchestra
3. Beautiful Girls
4. Betty Home And Sally’s Story
5. Bunny’s Bop
6. Hurry Into The Far Away Places
7. Draper’s Ruse
8. Summer Man
9. The Arrival
10. Hotel Bossa
11. Lights Out
12. For Number Four And Anna
13. At The Codfish Ball
14. Don And Betty In Rome
15. Like A Good Girlfriend
16. First Kiss
17. A Little Kiss
18. The New York Times
19. Glo-Coat
20. Christmas Conga
21. Pete’s Not Talking
22. Betty’s Call
23. A Beautiful Mine
Email:
info@silvascreen.co.uk