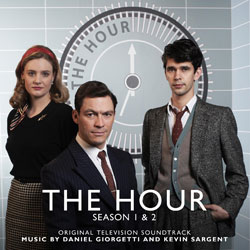 Download the digital booklet
Beginning in 1956, the two series of BBC TV’s The Hour captured perfectly the era of television news as current affairs programmes expanded with a global reach, adding to the storyline a veneer of mystery and intrigue behind the scenes. The series was nominated for BAFTA and Golden Globe Awards. Season 1 featured music by Daniel Giorgetti and season 2 by Kevin Sargent. Giorgetti studied composition at the Royal College Of Music and past work includes The Somme, The Last Days Of The Raj and Foyle’s War. Sargent was a member of the influential dance-rock band Thrashing Doves before becoming a media composer on projects such as We’ll Take Manhattan and an Ivor Novello nominated score for A Waste Of Time. With title music inspired by ticking clocks, 50s cool and the chimes of Big Ben the score is a landscape of classy jazz arrangement which brilliantly evoke the era.
1. The Hour
2. Previously
3. Enter Kiki
4. Where’s Hector
5. Randall Brown
6. Betcha I Getcha
7. So Bloody Lost
8. Paradise Rhumba
9. Kiki Returns
10. Night Thoughts
11. Never Do A Tango With An Eskimo
12. Stern & Kiki
13. Paradise Club Theme
14. The Afternoon Show
15. Softly, Softly
16. Success Is The Best Revenge
17. Bel & Hector
18. Do What You Need To Do
19. The Naming Of Names
20. The Raid
21. The Truth Will Set You Free
22. The Ghosts
23. You Are Possible With Me
24. End Credits
Email:
info@silvascreen.co.uk