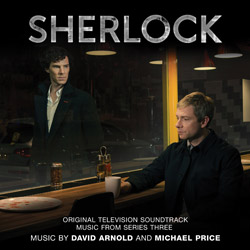 Download the digital booklet
Label Store
Since its UK TV debut in 2010, Sherlock has developed into a worldwide TV phenomenon and has been exported by the BBC to over 200 territories. Sales of David Arnold and Michael Price’s beguiling scores for series 1 and 2 are close to 9,000 in the UK and have also achieved significant sales in the US, Europe and the Far East.The soundtracks have received BAFTA and Emmy nominations and have won an RTS Television Award. David Arnold is one of the UK’s leading film composers, penning the scores to a host of blockbuster movies including Stargate, Independence Day and 2 Fast 2 Furious. He also successfully took over the scoring of the James Bond movies on the recommendation of John Barry. Michael Price is a multi-talented composer, music editor and arranger whose credits include Band Of Brothers, The Lord Of The Rings and Love Actually. “If David Arnold and Michael Price did not exist, it would be necessary for man to invent them. Their contribution to Sherlock is immeasurable. Thrilling, cheeky, sinister, playful and simply world-class…the music’s not bad either.” Mark Gatiss (Sherlock and League Of Gentlemen creator)