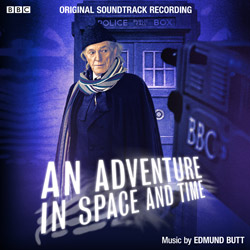 Download the digital booklet
Mark Gatiss’ (League Of Gentlemen, Sherlock) highly acclaimed TV docudrama about the genesis of the Doctor Who TV series delighted die-hard fans and casual viewers on its BBC2 debut and swiftly received a second showing at Christmas. Film and TV composer Edmund Butt has had an extensive career as a writer, performer and producer winning Royal Television Awards for his score to Yellowstone and Garrow’s Law. Film credits include The Dark and 24 Hours In London alongside TV work that includes Mistresses, Ashes To Ashes and The Suspicions Of Mr. Whicher. The booklet for this release is reversible to allow the display of a separate cover featuring alternative promotional material.
“Making ‘Adventure’ was a wonderful experience. The whole team were absolutely dedicated to the project, going the extra mile (or parsec) to create that smoggy early 60s world where so much seemed (and was) suddenly possible. And none more so than Edmund Butt whose gorgeous score is one of the highlights of the film. I’ve been completely overwhelmed by the response to the film. It was a very special project from the outset and I know Ed’s soundtrack will continue to thrill and delight for, well, the rest of space and time…” – Mark Gatiss
1. Main Title – An Adventure In Space And Time
2. The Right Man
3. The First Woman Producer
4. I’ve Got An Idea…
5. The Daleks
6. Kill Dr. Who
7. What Dimension?
8. This Is My Show
9. Autograph Hunting
10. Sydney Newman
11. Scarlett O’Hara
12. Piss & Vinegar
13. Dressing Room
14. JFK Assassinated
15. The TARDIS
16. Goodbye Susan
17. 10 Million Viewers
18. The Fans
19. I’m So Sorry Bill
20. Kiss Goodbye
21. My Successor
22. ISOP Galaxy
23. Irreplaceable
24. The New Doctor
25. Time’s Up…
Email:
info@silvascreen.co.uk