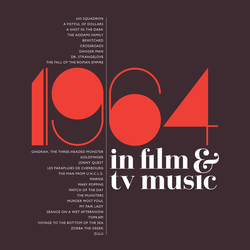 1964 was a spectacular year for film and television with both mediums delivering productions that 50 years on remain equally popular today. Iconic is a much misused word in the second decade of the 21st century but 1964 overflowed with style, creativity, trend-setting, originality, inspiration and inventiveness.
It was awash with musical gems on the big and small screen. The Beatles’ A Hard Day’s Night soundtrack composed entirely of Lennon/McCartney songs, the genius of Robert and Richard Sherman’s songs for Mary Poppins and Henry Mancini’s laid back A Shot In The Dark theme. TV had Tony Hatch’s timeless theme to Crossroads, Jerry Goldsmith’s strident The Man From U.N.C.L.E music and Hoyt Curtin’s relentlessly jazzy theme for Jonny Quest.
This compilation of new recordings brings together a rich tapestry of music from an era when every detail of a production was finely honed and the sound was not designed but artistically created by composers and writers and delivered by the finest musicians.
1. 633 Squadron
2. A Fistful Of Dollars
3. A Shot In The Dark
4. The Addams Family
5. Bewitched
6. Crossroads
7. Danger Man
8. Dr. Strangelove – The Bomb Run
9. The Fall Of The Roman Empire – Overture
10. Ghidorah, The Three Headed Monster
11. Goldfinger
12. Jonny Quest
13. Les Parapluies de Cherbourg
14. The Man From U.N.C.L.E.
15. Marnie
16. Mary Poppins – Supercalifragilisticexpialidocious
17. Match Of The Day
18. The Munsters
19. Murder Most Foul – The Miss Marple Theme
20. My Fair Lady – I Could Have Danced All Night
21. Séance On A Wet Afternoon – Main Title / The Kidnap / The Ransom / End Title
22. Topkapi
23. Voyage To The Bottom Of The Sea
24. Zorba The Greek – Zorba’s Dance
25. Zulu – First Zulu Appearance and Assault
Email:
info@silvascreen.co.uk