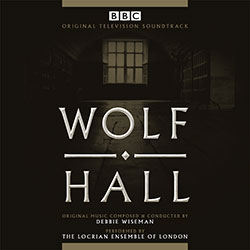 Download the digital booklet
Wolf Hall is the most keenly anticipated BBC drama for 2015. Based on the Booker Prize-winning novels of Hilary Mantel its all-star cast includes Mark Rylance, Damian Lewis, Claire Foy and Jonathan Pryce. The six part serial presents an intimate portrait of Thomas Cromwell, Henry VIII’s chief minister and confidante. Leading British film and TV composer Debbie Wiseman in her sixth collaboration with BAFTA Award winning director Peter Kosminsky has created a highly original score mixing Tudor instruments with modern to create the austere and vivid musical atmosphere of the time. Performed by the celebrated Locrian Ensemble Of London, Debbie says,  “It’s a huge privilege to have been asked to create the score for the drama adaptation of Hilary Mantel’s stunning novels. My aim was to create a musical world inspired by the vitality and elegance of the novels, and the vivid screenplay by Peter Straughan. Peter Kosminsky’s powerful visual adaptation and Mark Rylance’s mesmerising performance as Thomas Cromwell have been a huge inspiration throughout the composing process.” Debbie Wiseman MBE is one of Britain’s most successful female music ambassadors as a composer, conductor and also a presenter. With over 200 credits in TV and film, composing highlights include A Poet In New York, The Andrew Marr Show theme, The Promise and the Ivor Novello Award nominated Wilde and Death Of Yugoslavia.