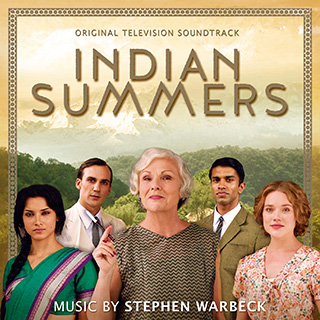 Download the digital booklet
India, 1932. This ten part Sunday night drama hit for Channel 4 set in the British colony of Simla at the foot of the Himalayas, British colonial rule is coming to an end. The place is a hot bed of love, secrets, artists, intriguers, expats and both rich and poor. This multi-cultural drama grabbed audiences from episode one and has been renewed for a second series in 2016. Composer Stephen Warbeck is one of Britain’s most successful composers in film and television, winning the Academy Award in 1999 for Best Original Music with his exquisite score for Shakespeare In Love. Over 100 composer credits in 25 years cover a selection of major film and television titles. They include Prime Suspect, Billy Elliot, Captain Corelli’s Mandolin and Charlotte Gray.
1. The Beginning
2. Indian Summers
3. Aafrin And Seeta
4. Defiance
5. Simla
6. A Matter Of Honour
7. Song For Rain
8. Before The Hanging
9. The Hills
10. Alice And Aafrin
11. The Gun
12.  Alice
13. The Dance And The Kiss
14. The Hut
15. The Coroner
16. The Conversation
17. To The Club
18. Eviction Notice
19. Aafrin
20. The Hospital
21. Waiting For Night
22. Murder Charge
23. The End
Email:
info@silvascreen.co.uk