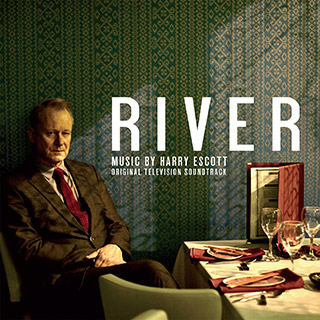 Download the digital booklet
Starring Stellan Skarsgård (The Girl With The Dragon Tattoo) and Eddie Marsan (Ray Donovan), this six part crime thriller is a flagship drama for BBCTV’s autumn season. Skarsgård plays a brilliant police officer whose genius and fault-line is the fragility of his mind. Composer Harry Escott first came to prominence in 2005 with his score to the influential psychological horror film Hard Candy. Working in both film and TV his credits includes, Deep Water, The Selfish Giant, Stephen Fry In America and Poppy Shakespeare. The Face Of An Angel, his third collaboration with BAFTA winning director Michael Winterbottom (following a A Mighty Heart and The Road To Guantanamo) was released this year. “The care and attention to detail which the writer, producers and directors lavished on this show (River) was both inspiring and intimidating. I knew I had to give it my all, which I did, and I am hugely proud to have been a part of it.” – Harry Escott