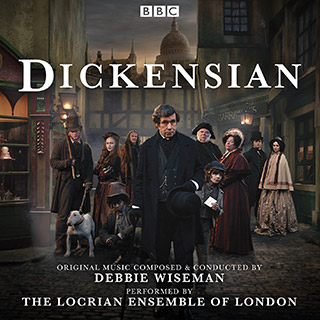 Download the digital booklet
Debbie Wiseman follows her 2015 Classical chart topping release Wolf Hall with the soundtrack to the major new BBC drama production, Dickensian. Launching over Christmas 2015 this ambitious 20 part series stars Stephen Rea, Pauline Collins and Caroline Quentin and is set within the fictional realms of Charles Dickens’ critically acclaimed novels. It brings together his most iconic characters such as Scrooge, Miss Havisham and Fagin, with all the action taking place soap style in a lavishly recreated 19th century cobbled street. Debbie Wiseman is one of the UK’s most in-demand composers, whose film and TV scores have won many accolades. With over 200 credits in TV and film, composing highlights include A Poet In New York, The Andrew Marr Show theme, The Promise and the Ivor Novello Award nominated Wilde and Death Of Yugoslavia. She is currently Classic FM’s Composer in Residence.
1. Dickensian
2. The Old Curiosity Shop
3. Scrooge And Marley
4. Market Street
5. Over Blessed With Fortune
6. Bucket Of The Detective
7. A Poor Choice Of Friends
8. I Am Arthur Havisham
9. A Cratchit Christmas
10. The Order Of Things
11. A Woman In A Man’s World
12. Cheese And Smoking Bishop
13. A Game Of Dares
14. What The Eye Doesn’t See
15. A Small Reward For A Small Favour
16. Ideas Are Dangerous
17. Provisions For Mr Wegg
18. The Work Of Providence
19. Cross To Bear
20. A Long Road Without A Turn
21. No Murderer
Email:
info@silvascreen.co.uk