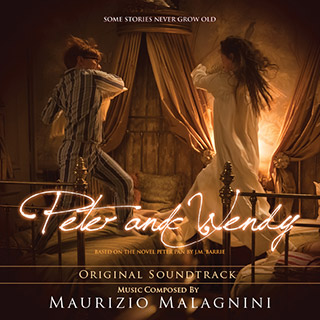 Starring Stanley Tucci in three roles as Captain Hook, Mr Darling, and Great Ormond Street Hospital surgeon Mr. Wylie. this 2015 Christmas TV special was a major hit with audiences in the UK. International award-winning composer Maurizio Malagnini (The Paradise, Call The Midwife) burst onto the scene in 2009, bringing to television his cinematic class and stunning melodies through his scores to numerous BBC hits. In demand because of his ability to vary his palette of sounds and styles, each time bringing the audience to the heart of the story, Malagnini’s work on The Paradise (broadcast in 132 territories) has recently been recognized with three Music + Sound Awards and an Emmy Award Nomination. It has been hailed as a ‘masterpiece of musical storytelling.’.
1. Main Titles
2. Great Ormond Street Hospital
3. The Hospital Museum
4. Receiving The Book
5. Looking For The Shadow
6. The Flight To Neverland
7. Lucy’s Dream
8. Captain Hook
9. The Bear And The Crocodile
10. Keep Your Eyes Open
11. The Lost Boys
12. Lucy Is Alive
13. A Beautiful Place To Live
14. Bedtime For The Children
15. The Execution
16. The Mermaids
17. The First Fight
18. The Kite
19. What If Something Goes Wrong
20. Hook Poisons The Medecine
21. Tinker Bell Drinks The Poison
22. I Believe In Fairies
23. Back To The Ship
24. The Final Fight
25. The Death Of Captain Hook
26. Peter’s Farwell
27. Leaving The Hospital
28. Peter And Wendy (Song)
Email:
info@silvascreen.co.uk