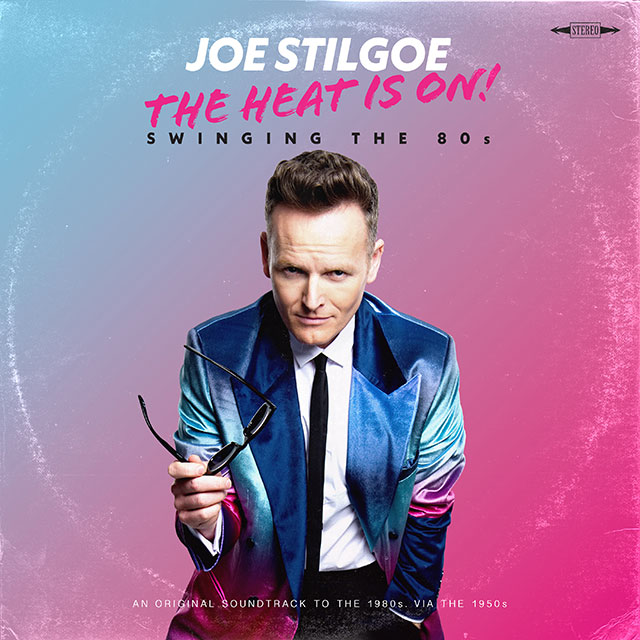 Download the digital booklet
Label Store
“What if all these songs from all these life-changing movies were actually big band classics?”
On June 28th Silva Screen Records will release Joe Stilgoe’s album of 80s movie hits arranged in a 50s big band style. To celebrate the album release, Joe and his Mighty Big Band will be performing at Ronnie Scott’s in London on 30th June, 1st and 2nd July.
This is the first time Joe has collaborated with Silva Screen on a solo album. Speaking about the project, he says “this album basically is my childhood. Mixing the movies I was obsessed with and the big band music I felt such an affinity when everyone else was listening to A-Ha.”
The album continues Joe’s much loved and critically acclaimed style of combining great songs from the past with an exciting and relevant new spin. Connecting the dots between the 50s and 80s, THE HEAT IS ON! shines a spotlight on some of the greatest movie songs from 80s blockbusters – Beverly Hills Cop, Bill and Ted’s Excellent Adventure, Batman, Short Circuit, The Karate Kid and many more. Using the great arrangers of the 1950s as inspiration – Nelson Riddle, Robert Farnan, Sammy Nestico – these classic songs are almost unrecognisable in their new guise as perhaps the lost standards from the decade of swing and rock ‘n’ roll.

“Growing up in the 80s in Southern England wasn’t much like the movies, but on the daydreamy days I would imagine I was Tom Hanks in Big, Michael J Fox in Back To The Future, Judd Nelson in The Breakfast Club and sometimes even Mary Stuart Masterson in Some Kind Of Wonderful. I fell in love with the music from American films, as they seemed to have everything I longed for – the wide streets with white clapboard houses, perfect front lawns and strangely amenable older residents with hoses, the bikes with armchair seats ridden by the kids in ET, the sense of adventure and stories in Stand By Me, the massive drums and massive choruses from those ballads that only the 80s knew how to deliver. All that was missing for a boy who would go on to dream of singing with a big band was that – big bands. I don’t remember any big band music from the 80s, or at least, none that reached me. So, for this album, I thought we’d bring it all together. What if all these songs from all these life-changing movies were actually big band classics?”
Amazon
iTunes / Apple
Spotify