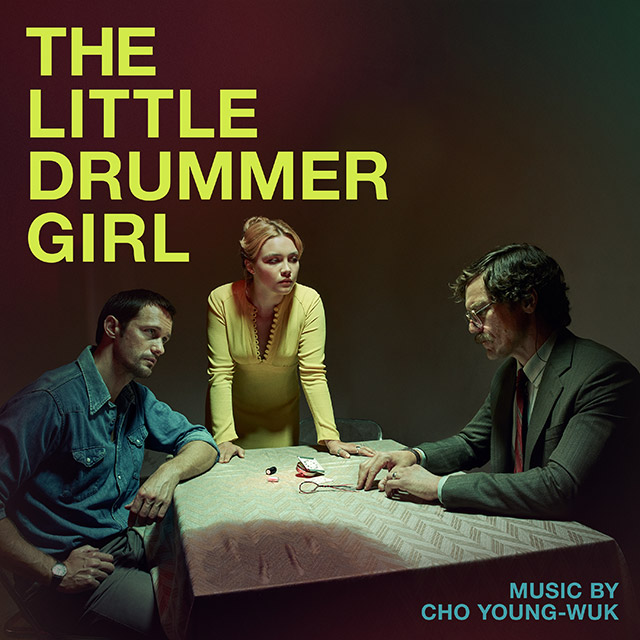 Download the digital booklet
Label Store
Amazon
Apple Music
Spotify
Award-winning composer Cho Young-wuk’s evocative soundtrack to Park Chan-wook’s BBC adaptation of John le Carré’s classic 1983 spy novel.
Featuring Florence Pugh, Alexander Skarsgård, Michael Shannon.
The Little Drummer Girl is the follow up to The Night Manager (2016), the second soundtrack from The Ink Factory BBC series to be released on Silva Screen Records. Dedicated to adaptations of John le Carré’s novels, The Ink Factory was founded in 2010 by John le Carré’s sons Stephen and Simon Cornwell.
Broadcast in 2018, the 6 part mini-series features actors, spies and terrorists, inter-weaving the characters through an intricate and complex storyline. Park says “There’s the dynamic between fiction and reality, and how the lines get blurred. Then there’s the question of what’s the truth and what’s performance, and also the dynamic between the assailants and the victims.” Park’s visual depiction of the 1970s era is peppered with symbolic use of colour; the slightly dreamy, dissociated atmosphere of the series is disrupted by a striking palette of yellows, oranges, blues and greens as light and shade are utilised to observe the sharp contrast and clashes between characters. The visuals and storylines are mirrored and bolstered by Cho Young-wuk’s exquisite soundtrack, brimming with bitter-sweet melodies. The melodies are as strong and complex as the characters depicted.

Cho Young-wuk and Korean art-house director Park Chan-wook have proved to be one of the great composer and director pairings. Old friends and neighbours, Cho and Park’s friendship pre-dates their film careers and thus far have collaborated on internationally acclaimed Oldboy (Grand Prix winner, Cannes 2004), Lady Vengeance (2009), Thirst and The Handmaiden (2016).
Since composing the soundtrack for The Contact (1997), the first ever million-selling soundtrack to a Korean film, Cho has created over 50 film scores. Today, he is the number one South Korean orchestral film composer, scoring some of the biggest art and box office hits.
The series was broadcast on BBC and AMC.