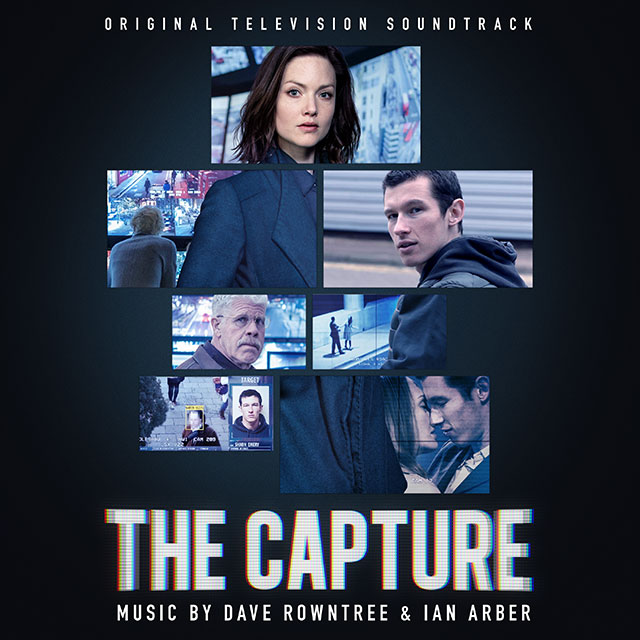 Download the digital booklet
Amazon
Apple Music
Spotify
“In the most spied on country in the world, the BBC surveillance thriller is both deeply unsettling and terrifyingly plausible” – The Guardian
Starring Holliday Grainger and Callum Turner, The Capture is BBC’s Big Brother themed thriller set in our contemporary world of digital surveillance. The first six episodes of Season 1 established a heightened world of deception and paranoia. Season 2 filming is scheduled for summer 2021.

Composers Dave Rowntree and Ian Arber were presented with a brief to compose a complex and melody-driven score. The director Ben Chanan (The Missing, Cyberbully) wanted the score to reflect the puzzle nature of the story, using bold and idiosyncratic themes for the characters to help enhance the show’s twists and turns. The music was to become a part of storytelling, and the themes were to evolve with the characters, as their relationships developed, entwined and collided.
David Rowntree and Ian Arber used their strengths as a duo to approach this distinctive and mysterious musical world. David’s experimental, analogue synth and percussive experience, in combination with Ian’s more traditional, melody-driven orchestral background led to a rich and unique hybrid of ideas and techniques, with both composers collaborating on every cue. Dave Rowntree is the drummer for the rock band Blur, whilst Ian Arber (Medici, My Name Is Lenny, I Am Bolt) is a classically trained composer proficient in cello, piano, bass, electric and acoustic guitar, and music production.
“We created the sound of this world using our unique blend of electronic and organic sounds, interweaving a live string section for the characters at the heart of the story. The purity of the strings helped contrast and focus in on the heart of the human stories within the unravelling world. We used many effects and techniques to distort, glitch and stutter electronic sounds, but also processed the purer sounds like the strings, when our musical worlds needed to collide. We hid clues in the music by creating images and converting these to sounds using a number of techniques which allowed the images to be reconstructed by a viewer from the audio, and also incorporated hints based on Morse Code rhythms.” – Ian Arber