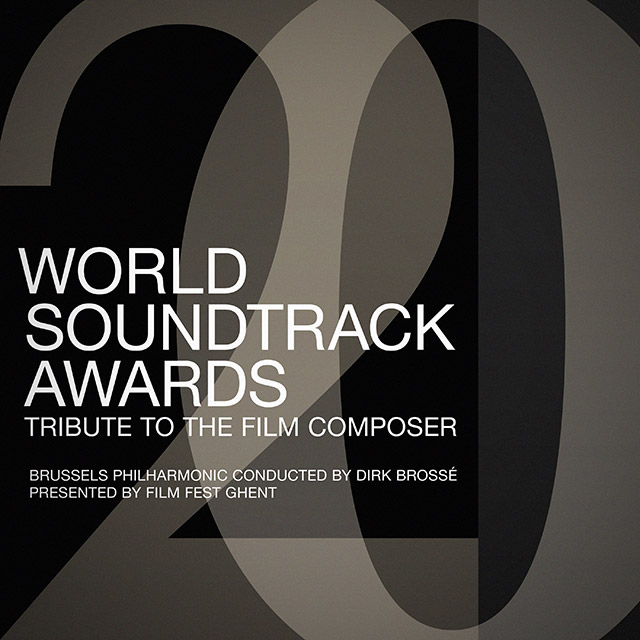 Supported by the Film Fest Gent’s World Soundtrack Awards, Tribute To The Film Composer is the sixth release in the WSA series on Silva Screen Records. The music is performed by the Brussels Philharmonic and conducted by Dirk Brossé.
Every year, an outstanding film music composer is invited to present their work during the annual World Soundtrack Awards Gala & Concert and in 2020 the spotlight is on past winners. The Academy celebrates 20 years of the World Soundtrack Awards with an anniversary concert on 24th October and album devoted to all thirteen Awards winning composers.
Tribute To the Film Composer album highlights the variety of the composers’ output and it features exclusive premiere studio recordings. Some of the tracks are concert arrangements, adapted by the composer for a life beyond the film or TV score. Other tracks are new recordings of cues that have never been released on a soundtrack album or which were not even used in the film.
The album’s title is derived from the playful closing album track, John Williams’s 2002 homage to his peers. Lasting less than five minutes, the Tribute To The Film Composer piece skilfully weaves through 23 different film themes by various composers who were nearly all either acquaintances or very close friends of the legendary John Williams.
Due to Covid restrictions, this year’s online concert will be free for fans to watch and the organisers are hoping this will further widen the already International WSA fanbase. Click here to learn more >

JÓHANN JÓHANNSSON / RUTGER HOEDEMAEKERS
07. When at Last the Wind Lulled 2:13

MICHAEL GIACCHINO
13. Star Trek, into Darkness and Beyond (Suite) 7:23

ANGELO BADALAMENTI
14. Twin Peaks: Fire Walk with Me – The Voice of Love 4:02