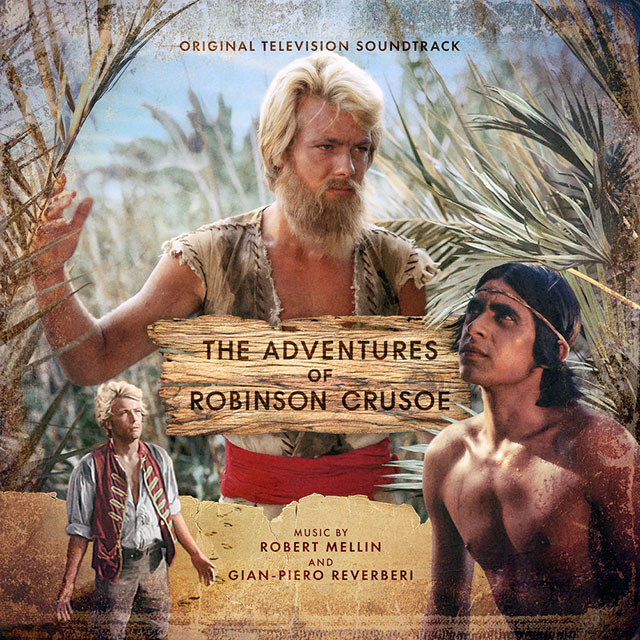 Label Store
Amazon
Apple Music
Spotify
To many people, British Television had its heyday in the 1960s, a plethora of entertainment for all ages. Children’s TV was no exception, the many adventure series, educational programmes and puppet shows all had a profound effect on those lucky enough to have grown up in those years.
At 5PM on October 12th, 1965, BBC1 viewers witnessed a gentle sea rolling over a sandy shore that could just about be anywhere in the world, but in that short twenty seconds or so not only did we discover it was a ‘Franco London Film’ presentation of The Adventures of Robinson Crusoe’, it also gave us that short burst intro to the theme that would stay with us well after the thirteen 25 minute episodes had faded into the mists of time. A collaboration between composers Robert Mellin and Gian-Piero Reverberi would give us the wonderful theme and incidental music from this much-loved series.
The Adventures of Robinson Crusoe was a French- German drama series made by Franco London Films as an adaptation of Daniel Defoe’s 1719 novel Robinson Crusoe. It was the first, and often quoted as being the best television adaptation of the original story. The series would enjoy a huge European audience in what would be the very first European Television Channel co-production.
Silva Screen’s original release from 31 years ago was updated in 1997 when new material came to light and is now reissued once more with a definitive history of the music and series written by Stephen Brown & Lynn Simpson.