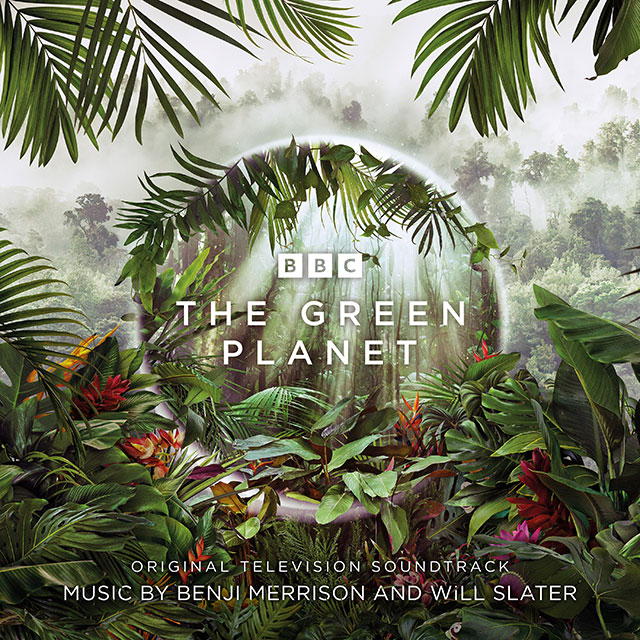 Download the digital booklet
Label Store
Amazon
Apple Music
Spotify
The Green Planet, Benji Merrison and Will Slater’s lush and atmospheric soundtrack to BBC Earth’s 5-episode TV series narrated by David Attenborough. The series takes place across five worlds – tropical, water, seasonal, desert and human and shows these worlds from a plant’s eye view. It treats plants as protagonists and follows their story at their own pace, whilst they strive to reproduce, communicate, and survive. The Guardian describes the viewing experience “From glowing bioluminescent fungus to 7,000 different camera set-ups for ants, the veteran broadcaster’s miraculous profile of plant life will have you gasping in astonishment so often you’ll be breathless”.
The original soundtrack was composed by Benji Merrison and Will Slater. “The challenge was to create a score which allows the audience to connect with plants on an emotional level, much more of a conundrum than when scoring for the animal kingdom.” says Benji Merrison. He then describes the composition process “We recorded a number of experimental sessions, using unconventional instrumentation, both acoustic and electronic. We also experimented recording electronic signals from plants, and translating this into audio. For the more traditional sound elements, we recorded individual orchestral sections, building up a library of textures, phrases and orchestral colours. A kind of ‘modular’ musical kit of parts. During the ‘coal-face’ period of the scoring, we re-sampled ourselves, by processing and integrating these modular components into aspects of the final cues, finishing them off with additional recording sessions. This created a sort of ‘real, but not real’ sound, which was very effective in bringing the audience inside the surreal wonder of the plant world.”

Acclaimed multi-disciplinary music masters in their own right, Benji Merrison and Will Slater are now creating sounds for the screen together calling upon their collective experience from a music and arts education, work producing and touring records, as well composing for Film & TV. Their working partnership started when they were commissioned to score the popular BBC David Attenborough series Dynasties in 2018, for which they received nominations from the IFMCA and News and Documentary Emmys, followed by Meerkat – A Dynasties Special and Missile from the East. Benji is an award-winning classically trained composer and a skilled music producer and engineer. His distinctive musical voice is in high demand, and he is known for SAS: Red Notice (for which he received the World Soundtrack Award), Forces of Nature with Brian Cox, Dynasties, General Magic and The Beatles and India. Will Slater has been composing for television for close to 20 years and his extensive CV includes the RTS winning score Africa, Planet Earth Live, Dynasties, Shark and One Strange Rock.