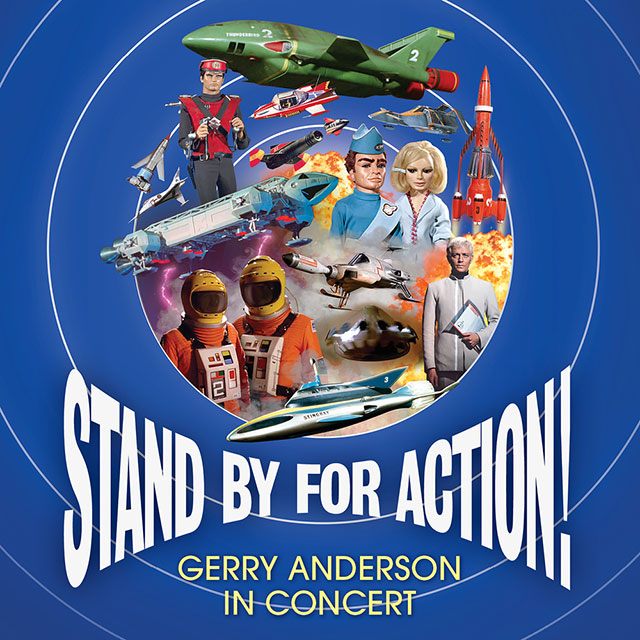 Label Store
Amazon
Apple Music
Spotify
Performed by Carrot Productions’ Hackenbacker Orchestra
Conducted by George Morton
From death defying heroics to fantastic visions of the future and adventures beyond imagination. For decades the world has been enthralled by the television and film productions of Gerry Anderson. Perhaps the one thing which binds this remarkable canon of work together is an incredible tapestry of music which enriches each series and instalment. Despite all the impressive techniques and technical wizardry employed by Derek Meddings and his special effects crew, Stingray’s launch wouldn’t have half the impact if robbed of Barry Gray’s sweeping crescendo. Similarly, the ponderous ache of the Alphans plight and a police cruiser chase in Demeter City are brought to life by their respective musical accompaniments. The Stand By For Action! concert in April 2022 was a celebration of this incredible body of music which helped to bring life to some of the most popular television series ever made. This sensational show transported fans through over 60 years of the Gerry Anderson back catalogue, paying homage to his special partnership with composers including Barry Gray, Richard Harvey and Crispin Merrell.
The iconic theme tunes and incidental music from classic Anderson shows – including Thunderbirds, Space: 1999, Captain Scarlet and UFO – all feature alongside that of his earliest work like The Adventures of Twizzle, Torchy the Battery Boy and Feather Falls, right through to Terrahawks, Space Precinct and his final production: New Captain Scarlet.