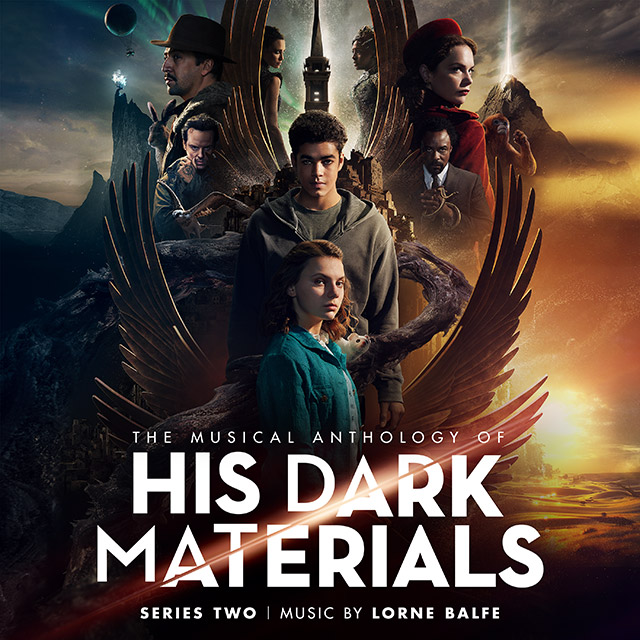 Label Store
Amazon
Apple Music
Spotify
‘The Musical Anthology of His Dark Materials: Series Two’, with music composed by Lorne Balfe, this second ‘Musical Anthology’ volume presents newly composed principal themes from the second series.
“Writing the score for season two was a fantastic experience due to being able to delve into the musical world of Cittàgazze.” says Lorne. “Recording the score had its challenges due to COVID. Musicians and singers from Inverness, Cardiff, London, Vienna and Bulgaria contributed to this season’s soundtrack and made the music come alive.”
Series Two is based on The Subtle Knife, the second book in Philip Pullman’s trilogy. Dafne Keen is back as Lyra Belacqua alongside Ruth Wilson as Mrs Coulter and Lin Manuel-Miranda as Lee Scoresby. Also returning for series two is Ruta Gedmintas as Serafina Pekkala, Joe Tandberg as Lorek Byrnison and Helen McCrory as Stelmaria. Joining the cast this season are Terence Stamp, Andrew Scott, Jade Anouka and Simone Kirby.

The Musical Anthology of His Dark Material Series One was warmly received by the press:

“This is fantasy the way it should be done: sumptuous, inspiring both wonder and a sense of adventure, beautifully scored (by Lorne Balfe), with world building that is as impeccable as it is effortless.” – First Post
“It’s an epic work that perfectly foreshadows Lyra’s journey, and could easily belong in Assassin’s Creed or Tomb Raider” – Classic FM
“…thematically rich, dramatically potent fantasy music… It’s not just good by his standards, it’s good by anyone’s, easily the best episodic tv music I’ve heard in a very long time and it’s presented wonderfully on this well-conceived album… undoubtedly one of the most impressive new scores of the year.” – Movie-Wave

1. The Subtle Knife
2. Play the Serpent
3. Dark Materials: Between the Worlds
4. A Spectre’s Playground
5. A New Cardinal Rises
6. The Witch Queen of Lake Lubana
7. Children of The Prophecy
8. The City In The Sky
9. The Shaman