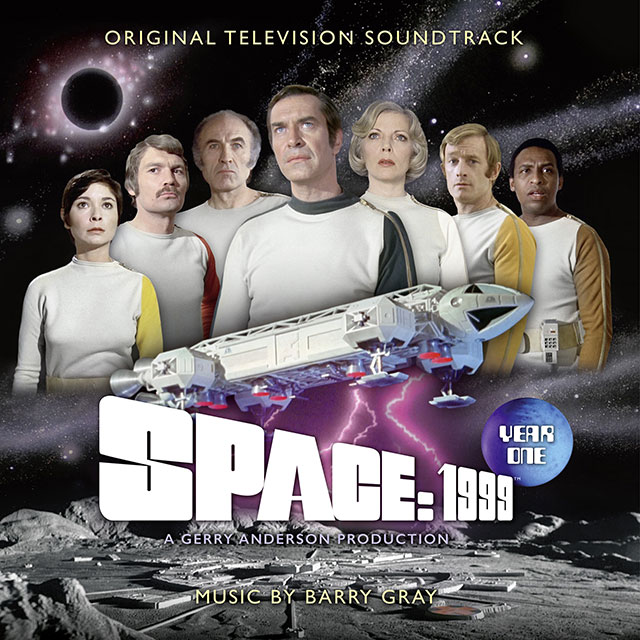 Label Store
Amazon
Apple Music
Spotify
OUT NOW DIGITALLY AND ON VINYL
Space: 1999 Year One.
The latest release in the series exploring the musical worlds of GERRY ANDERSON is the most extensive yet. Also available is Space: 1999 Year Two on vinyl. And a x2 CD set (of both Year One and Year Two) with a 28 page booklet.
Space: 1999 ran for two series from 1975 to 1977 and depicted the occupants of Moonbase Alpha and their struggle for survival when, after the explosion of a nuclear waste dump, the Moon is hurtled into space. The series was the most expensive produced for British television at that time and the most musically diverse of all the shows made by Anderson for ITC.
Gerry’s long-time musical partner in all the previous adventures was Barry Gray and Space: 1999 proved to be the last of their collaborations. For Series 2, Derek Wadsworth took over the reins to provide a more contemporary sound.
The selections from Year One show Gray’s skills in creating a memorable opening theme as well as dramatically evocative cues highlighting the plight of the Alphans as they became known. This Year One album also showcases a selection of library cues which featured throughout the series.
The popularity of the series has continued unabated with DVD releases from Network and new audio adventures created for Big Finish.
As with all the previous releases in this series, the albums feature newly remastered sound and episode presentations.