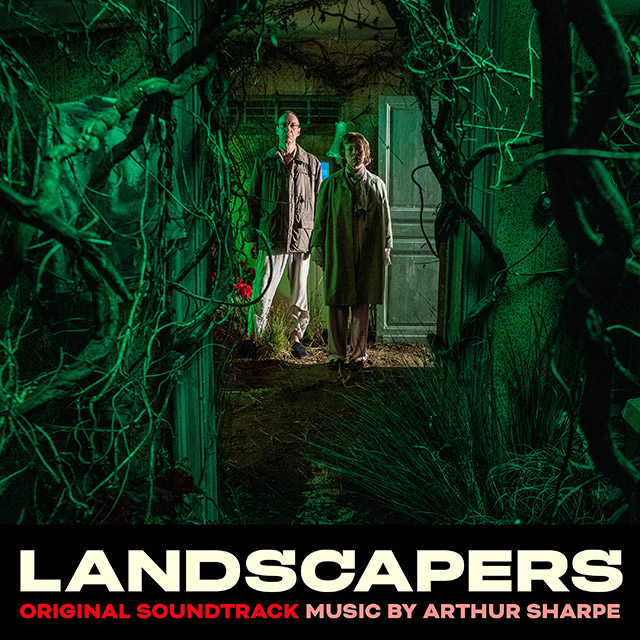 Winner of the 2022 BAFTA Television Awards for ‘Original Music’

Winner of the 2022 Ivor Novello Awards for ‘Best Television Soundtrack’
Label Store
Amazon
Apple Music
Spotify
The score for the Sky Atlantic true crime series, directed by Will Sharpe (Flowers), and starring Olivia Colman (The Crown, The Favourite) and David Thewlis (Fargo, Big Mouth). The score is composed by award winning composer Arthur Sharpe.
Landscapers is a co-production between HBO and Sky and is the latest project from SISTER, the company behind the multi-Emmy and BAFTA award-winning limited series, Chernobyl.
The series, described by Sky as “exhilarating and darkly funny”, was inspired by real events. Created and written by Ed Sinclair, it tells the story of a mild-mannered English couple murdering the wife’s parents and going undetected for a decade, bizarrely spending all the stolen money on Hollywood memorabilia. The story explores the power and dark side of love and fantasy. Olivia Colman, comments “the truth is it’s quite rare to be desperate to play a part on the first reading of a script, but that was the case here. The writing is brave, but subtle and tender too – a joy for any actor.”
Arthur Sharpe’s brilliant score maintains the romantic, overwrought, and claustrophobic sound throughout, with nods to the great Western scores in Spaghetti Landscapers and High Noon Mangle. Arthur explains his process “At the heart of Landscapers is a tension between reality and fiction, between the sinister story of a real-life double murder and Susan’s romanticised view of her relationship with Chris and her infatuation with Old Westerns and their male protagonists. This blend of darkness and the more sweeping flavours of classic cinema and the Wild West help to colour the protagonists in all different shades, so we are never quite sure if we are on their side or not. More classical leaning orchestral themes and instrumentation, led by melodic strings and woodwinds, carry the romance of Susan’s fantasies, but they are undercut by the more macabre elements that represent the murky shape-shifting ambiguity of the truth, such as discordant brass and bassoons playing in their darker upper ranges. Percussion built out of non-musical objects like metal chairs, desk lamps, even leeks, as well as the clanging of distant industrial works and processed recordings of the wind, all bring uneasy and unfamiliar textures which disturb Susan’s Hollywood idyll.”
Arthur Sharpe is an Award-winning film and TV composer. While still studying at Edinburgh University, he began his career writing music for various Cambridge Footlights shows including the sketch show Grow Up, which enjoyed a successful run at the Edinburgh Fringe Festival. He then went on to form part of the team behind the soundtrack for the BAFTA-nominated feature film Black Pond (2011). Other TV works include scoring the first series of the BBC1 comedy Ghosts (2019 – present), Women On The Verge (2018) created by Lorna Martin and Sharon Horgan, and Neil Forsyth’s BBC Scotland & BBC2 comedy drama Guilt (2019 – 2021) and most recently the feature film The Electrical Life Of Louis Wain (2021), starring Benedict Cumberbatch. Alongside his film and TV work, Arthur also fronts and writes for the indie band Arthur In Colour.
Also available on Silva Screen Records is Flowers II, the score for which Artur Sharpe received the RTS Craft & Design Award for Best Original Music in 2016. The RTS Jury stated that “There was a lot going on in this score and the music effectively became another character in the show with a sense of quirkiness and drama – which is hard to pull off, but done so with aplomb in this winning entry.”