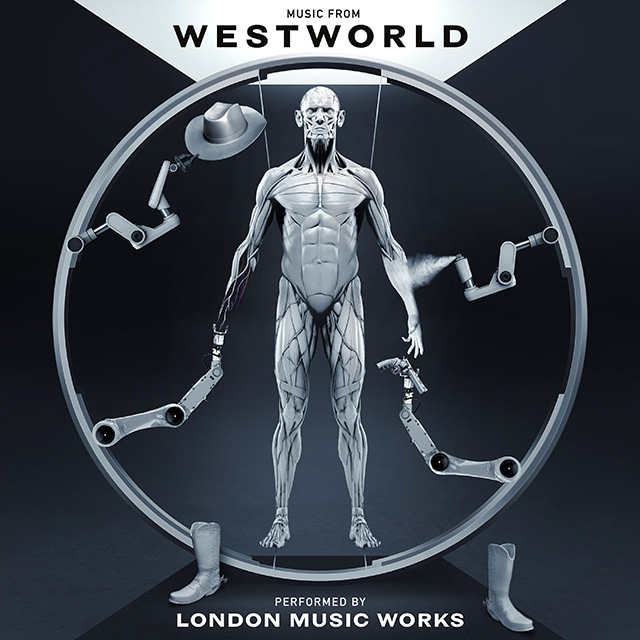 Label Store
Amazon
Apple Music
Spotify
The well received series is based on Michael Crichton’s book and the classic 1973 film, and its 1976 sequel, Futureworld. It is produced and aired by HBO, and stars Evan Rachel Wood as Dolores Abernathy, Thandiwe Newton as Maeve Millay, Ed Harris as Man In Black, Jeffrey Wright as Bernard Lowe, Anthony Hopkins as Dr Ford.
Westworld is a series which brings together two distinct worlds – the hot and dusty Wild West-themed amusement park and the cold, sterile futuristic laboratories that are the control centre for park operations. Composer Ramin Djawadi’s soundscapes perfectly fit both the visuals and the storytelling. Featuring varied and strong themed instrumental tracks from the series, Ramin’s compositional techniques also utilise vinyl scratches and pulsating drums, low, growling basslines and futuristic sci-fi effects, all the way to incorporating orchestral covers of well-known songs into the soundtrack. On this album you could hear Djawadi’s versions of The Rolling Stones (Paint it, Black), Nirvana (Heart-Shaped Box), Radiohead (I Promise, Codex), The Weeknd (Wicked Games) and Lana Del Rey (Video Games).
Ramin Djawadi comments on his work on the series “We’ve always had a great hybrid, and I always felt like that was such a creative and fun way to approach the score with season 1, where we had obviously the Westworld elements, and we did acoustic guitars and all the organic elements. And then, whenever we would be under the park with all the techy stuff, robots, and futuristic things, we always had to use the synthesizers. But, especially in season 3 when it pushed into this future world, it became very synthetic. Same with the songs and in the score itself, sometimes we use more synth. In season 4 now, we brought some of that also with the outliers, that there were a lot more organic elements that came back into play.”
The Emmy Award winning composer Ramin Djawadi is perhaps best known for his work on Game Of Thrones. He is also the composer for the HBO Game of Thrones prequel series, House of the Dragon (2022—present). Early on in his career he worked for Hans Zimmer’s Remote Control Studio and was assistant to composer Klaus Badelt. He has since scored blockbusters such as Clash of the Titans, Pacific Rim, Warcraft, A Wrinkle in Time and Eternals, television series Prison Break, Person of Interest, Jack Ryan and video games Medal of Honor, Gears of War 4, and Gears 5.