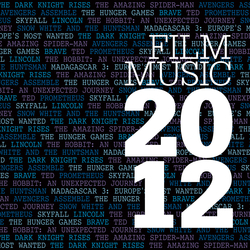 “(City of Prague Philharmonic and London Music Works) Both deliver top notch performances to these well crafted and, for the movie going public, well recognizable tunes… Highly recommended.” – Screen invasion
“…while not the original recordings, these are as near as possible to the quality of the originals thanks to both The City of Prague Philharmonic Orchestra and London Music Works…. when played next to each other its hard to tell which is the original and which is the reworking.” “A faultless collection” – Sci-Fi Online
“…a fine compilation” – Lost in the Multiplex
“Silva Screen Records has consistently brought us some fantastic albums over the years that present us with our favorite film music in a familiar but fresh way.” – FilmMusicMedia
“This year’s edition of Film Music is an incredibly fun album…” – G-pop Net
1. End Titles (From “Ted”)
2. New York City Surprise (From “Madagascar 3: Europe’s Most Wanted”)
3. Fate and Destiny (From “Brave”)
4. Freedom’s Call (From “Lincoln”)
5. Snow White (From “Snow White and the Huntsman”)
6. Life (From “Prometheus”)
7. Over Hill (From “The Hobbit: An Unexpected Journey”)
8. Imagine the Fire (From “The Dark Knight Rises”)
9. The Avengers (From “Avengers Assemble”)
10. Young Peter (From “The Amazing Spider-Man”)
11. Rue’s Farewell (From “The Hunger Games”)
12. Skyfall (From “Skyfall”)
Email:
info@silvascreen.co.uk