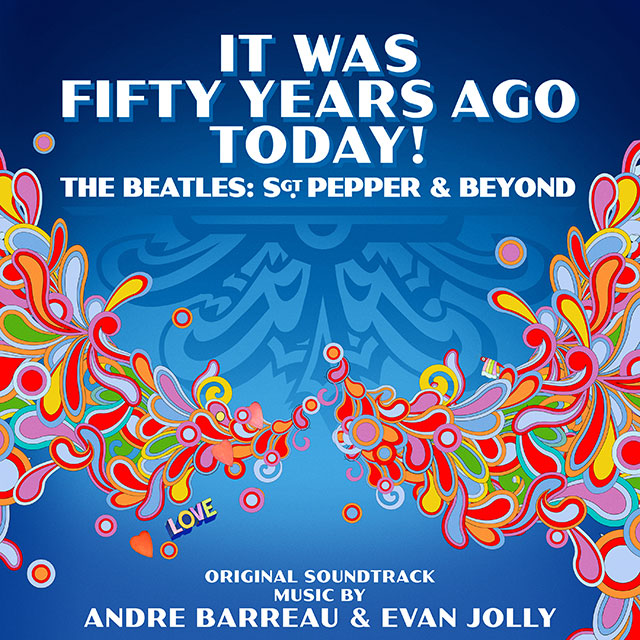 Amazon
Apple Music
Spotify
The documentary IT WAS FIFTY YEARS AGO TODAY! THE BEATLES: SGT. PEPPER & BEYOND examines the twelve months (Aug 1966-Aug 1967) that would arguably be the most crucial in the band’s career. A devoted fan since the age of nine, the film’s director Alan G. Parker has set out to explore this period by filming interviews with former employees, fellow musicians, family member and journalists, all of whom were there at the time. These stories are in turn supported by a vast array of impressive archival footage, much of it not seen since first transmission.

Unusually for a documentary the specially written score was recorded in London and Prague with a full symphony orchestra. Andre Barreau is a versatile composer, songwriter and guitarist. In the latter role his electrifying solo on Robbie William’s worldwide hit Angels resonates as one of the great pop moments of the 90s. His previous film work includes Sliding Doors, Laws Of Attraction and Dangerous Parking.

1. Fifty Years Ago Today!
2. To Progress You Have To Change
3. They Could Have Been Anywhere
4. Just A Coincidence / Making Of A Masterpiece
5. Imprisoned By Touring
6. Progressive Youth
7. Mystical Inspiration
8. A Real Bond
9. When I’m At The Cavern
10. Medals
11. Mystical Foresight
12. Decline
13. The Ladder Of Mysticism
14. Maharishi Bogus
15. Travelling
16. Music Is A Spiritual Thing
17. Rounding Up
18. Swinging London