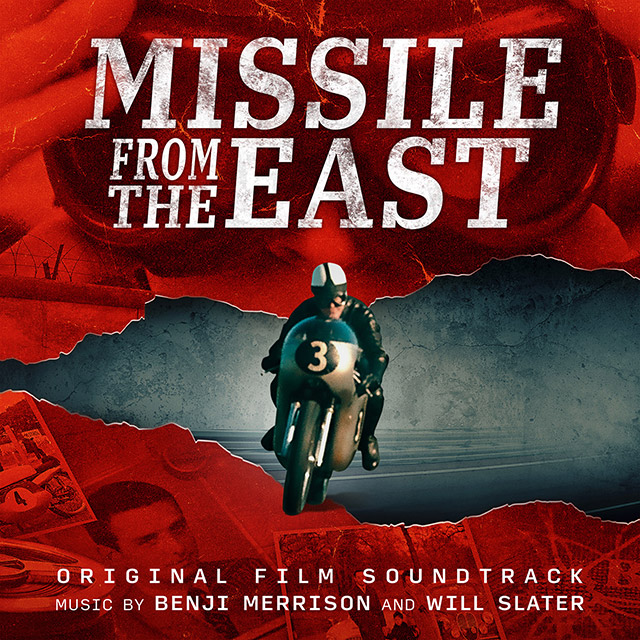 Label Store
Amazon
Apple Music
Spotify
Benji Merrison and Will Slater’s soundtrack to the 90-minute feature documentary Missile From The East. The film follows the true story of Ernst Degner, a champion East German motorcycle racer who risked his and his family’s life to defect to West Germany during the Swedish Grand Prix in 1961, taking MZ’s groundbreaking engine technology with him and helping Suzuki win its first Grand Prix Championship. For this intriguing documentary, Merrison and Slater created an exciting score that pulsates with exhilarating synth ostinatos, soaring strings and scattered tune fragments carried by strings and electric piano. Opening with synth ostinatos and gradually shifting into mellow soundscapes, the score resolves in the beautiful closing track Degner’s World, a tranquil piano piece.
Acclaimed multi-disciplinary music masters, Benji Merrison and Will Slater are now creating sounds for the screen together calling upon their collective experience from a music and arts education, work producing and touring records, as well composing for Film & TV. Their working partnership started when they were commissioned to score the popular BBC David Attenborough series _Dynasties_ in 2018, for which they received nominations from the IFMCA and News and Documentary Emmys, followed by Meerkat – A Dynasties Special and The Green Planet. Benji is an award-winning classically trained composer and a skilled music producer and engineer. His distinctive musical voice is in high demand, and he is known for SAS: Red Notice (for which he received the World Soundtrack Award), Forces of Nature with Brian Cox, Dynasties, General Magic and The Beatles and India. Will Slater has been composing for television for close to 20 years and his extensive CV includes the RTS winning score Africa, Planet Earth Live, Dynasties, Shark and One Strange Rock.
Currently available on Silva Screen Records are Benji Merrison and Will Slater’s soundtracks The Green Planet, Dynasties and Meerkat – A Dynasties Special and Benji Merrison’s scores for highly acclaimed General Magic and The Beatles And India.
Missile From The East is the Winner of the Golden Palm at the 22nd Beverly Hills Film Festival. Commissioned by SKY Documentary, the film premiered on Sky HD and is currently available to buy and stream on TV+, Amazon and NOWTV.