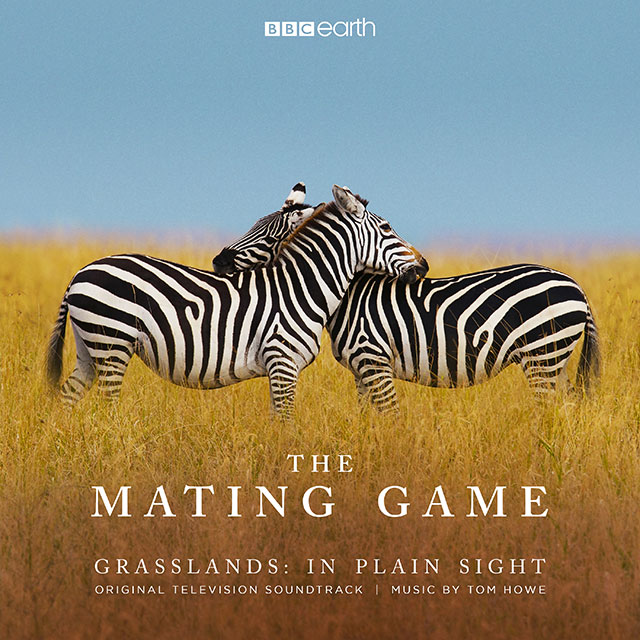 Oceans: Out of the Blue Jungles: In the Thick of It Freshwater: Timing Is Everything Composer Tom Howe’s (Great British Bake Off, Taskmaster) original music for David. Attenborough’s 5-part BBC series, The Mating Game, a landmark natural history series from Silverback Films. This release encompasses 5 digital albums featuring music from each episode.
Speaking in a recent issue of Radio Times, David Attenborough revealed that the series will feature things that have “never been seen on television before and which are undoubtedly some of the highlights of natural history spectacles”. Tom Howe’s score contributes to the natural history spectacle with strong themes, thematic developments and variations perfectly matching the visuals. The warmth, playfulness, suspension, and stress that the animals are experiencing are portrayed through Howe’s score in a nuanced and enriching ways.
Series Producer Jeff Wilson says “The Mating Game score needed to have a tone that played on the humorous nature of animal courtship and its obvious connections to our own lives, but also not lose the dramatic and wondrous story beats that the natural world often gifts us whilst filming. Tom knew immediately from the outset how to achieve this – his central theme for the Mating Game was so clever in how it was able to be shaped to suit stories as diverse as Ostriches displaying to oceanic Flatworms fencing with their penises! He knew how to adventurously turn on an emotional dime to suit the picture, whilst still maintaining musical integrity, and in the end his score elevated our production beyond our wildest dreams.”
From the producers of A Perfect Planet, The Mating Game is the story behind the most fascinating, hilarious and dramatic quests to find a mate and leave a lasting legacy. Exploring five different habitats across six continents, this series, narrated by Sir David Attenborough, reveals the varied, fascinating and downright bizarre strategies different animals use to find a mate. It is the ultimate inside view on what it takes to succeed at the mating game.

Tom Howe has created the music for over 100 films and television series. His work includes music for the much-loved Great British Bake Off as well as Taskmaster, Whiskey Cavalier, Paranormal Witness and the Lodge. He has also composed scores for films such as A Shaun the Sheep Movie: Farmageddon, Early Man, for which he received an Annie nomination, Professor Marston and the Wonder Women, and Upside-Down Magic. In 2020, Howe collaborated with Marcus Mumford on the theme song and soundtrack for the Apple TV+ production Ted Lasso, for which he received an Emmy nomination. In June 2020, Howe was made a member of the Academy of Motion Picture Arts and Sciences (Oscars). According to Jonathan Broxton of Movie Music UK, Tom Howe is “clearly a composer to watch” with his career “continuing on its upward trajectory”.