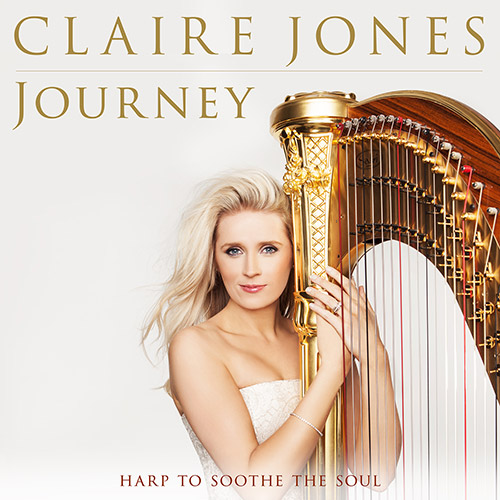 Since taking up her role as HRH Prince Of Wale’s harpist in 2007, Claire Jones has established herself as one of Britain’s most celebrated classical musicians. Her performance at the Duke and Duchess of Cambridge’s wedding reception in April 2011 created media interest in her music across the world and a year later she released the chart-topping album The Girl With The Golden Harp for Classic FM. The four years in her official role found her playing at over 170 royal engagements and state events as well as performing in private for HM The Queen and members of the Royal Family. Her career thus far has seen her perform as a soloist with the world’s leading orchestras and at some the most prestigious concert halls on the planet. She has performed with some of the biggest names in the classical music industry including Sir James Galway, Julian Lloyd Webber, Bryn Terfel, Alfie Boes and Sir Neville Marriner. With Journey, Claire performs 12 very special choices of music designed to create an atmosphere to soothe, relax and generally unwind. It includes a film theme (Ladies In Lavender), national airs and folk melodies from across the British Isles and of course some of her favourite classical music including Holst and Saint-Saens.
1. Ladies In Lavender
2. La Danse des Sylphes
3. Si Hei Lwli Mabi (Go To Sleep My Baby)
4. Nocturne No.5 in B? major H.37
5. Scarborough Fair
6. Silent Noon
7. The Planets, Op.32 II: Venus, the Bringer of Peace
8. Bluestone (Carreg Las)
9. A Farewell to St Petersburg: No. 10. The Lark
10. 10 Woodland Sketches, Op.51: No. 1 To a Wild Rose
11. Toss The Feathers
12. Symphony No. 3 in C minor, Op.78: Fantasie On Themes
Email:
info@silvascreen.co.uk