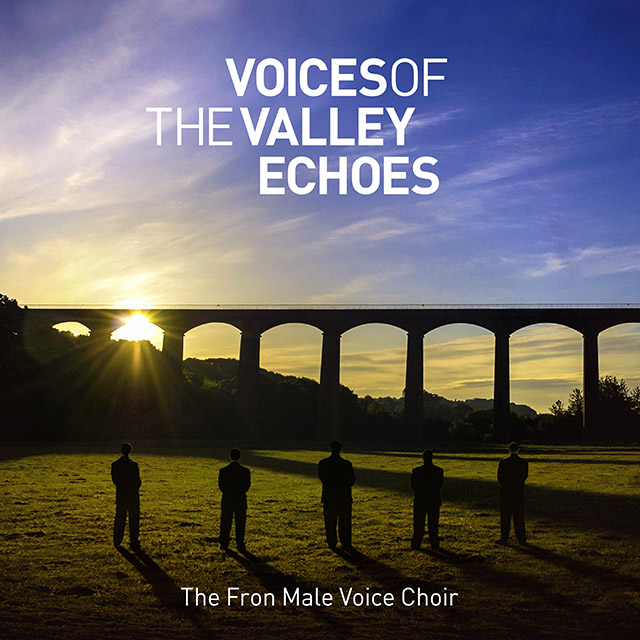 The Fron Male Voice Choir celebrates St David’s Day with the release of Echoes, their sixth recording in the Voices of the Valley series, on 26th February 2021.
The Fron Male Voice Choir is one of the most successful choirs in the UK. Their debut album, released in November 2007, achieved double platinum sales and was nominated for a Classical Brit Award. Following this initial success, the choir has toured extensively and their albums have sold in over 70 countries world-wide. The tracks from the Voices of the Valley series have since featured on numerous compilations and artist albums.
Full title Froncysyllte Male Voice Choir or Côr Meibion Froncysyllte, the Fron Male Voice Choir was formed in 1947 and is based in the village of Froncysyllte near Llangollen in Denbighshire, Wales. Their association with the world-famous Tenor Luciano Pavarotti started in 1955. The Fron choir hosted the Società Corale Gioachino Rossini from Modena, which won first prize at the Llangollen Eisteddfod under the musical direction of Luciano’s father, conductor Fernando Pavarotti. Luciano Pavarotti claimed that him singing in the choir and this win inspired him to take up a singing career.
Initially set up to compete in the Llangollen International Eisteddfod festival, The Fron Male Voice Choir quickly developed into a first-class, modern choir. Following on their debut album success, the BBC classical music reviewer Michael Quinn reflects on the Fron Choir as “a good example of modern day Welsh Choir singing” and praises their “considerable close harmony talents, beauty of sound and impressive technique”.

On Echoes, the modernity is reflected in both their choice of material and delivery; from Welsh staples such as Llanfair (Willliams), O Iesu Mawr (David Charles) and Tydi A Roddaist (Hughes) and American, Russian and Welsh sacred hymns (The Lords Prayer, Spaséniye Sodélal) to Billy Joel’s And So It Goes, Aznavour’s She and musical numbers A Million Dreams (The Greatest Showman), Maria (West Side Story) and Bring Him Home (Les Miserables). The close harmony sound is richly layered yet crisp, allowing a multitude of harmonics to resonate.
The choir’s latest Musical Director, Leigh Mason, took over in 2010. Since her arrival, the choir has gone on to achieve great success, winning competitions in Ireland and Cornwall, and at the worldrenowned Llangollen International Eisteddfod. Leigh was deeply involved in the recording and production of Echoes and was vital in enabling the Fron Choir to deliver this vibrant and captivating album.