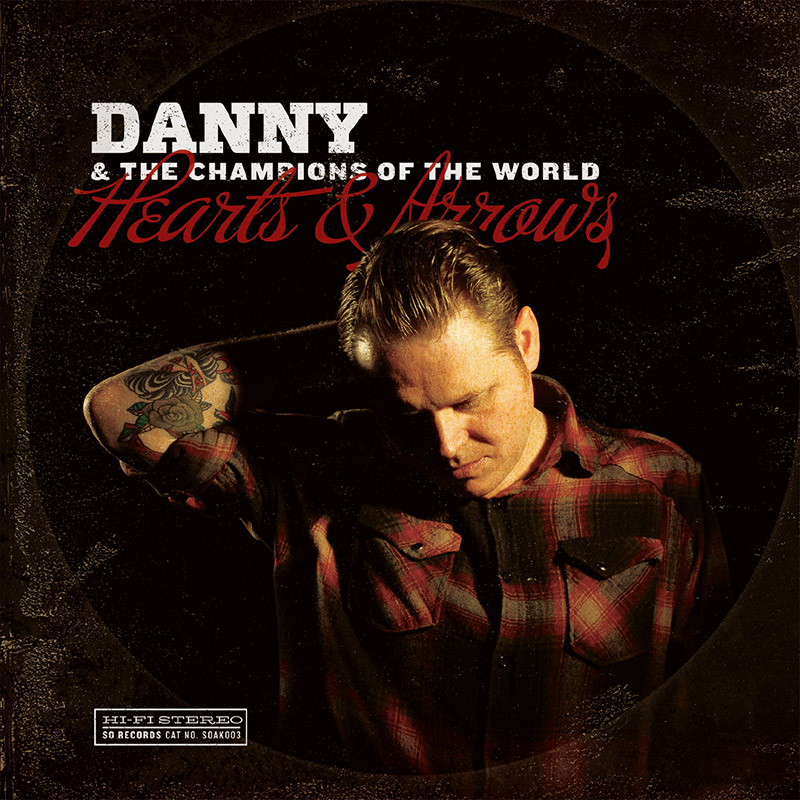 LABEL: SO RECORDINGS / SILVA SCREEN RECORDS
Amazon
Apple Music
Spotify
Following Danny & The Champions’ critically acclaimed `Streets Of Our Time’ comes this rousing 11 track follow up, `Hearts & Arrows’, from accomplished songwriter Danny Wilson and his current band of champions.
BBC Review:
Fans of Bruce Springsteen, Tom Petty and The Gaslight Anthem will lap up the ersatz blue-collar Americana of Danny Wilson, a south Londoner who appears to have been born to the sound of the screen door slamming and the sight of Mary’s dress waving. Wilson was already paying homage to The Boss when with previous outfit Grand Drive. Three albums in with his Champions – now a different line-up to that which recorded 2008’s debut and 2010’s Streets of Our Time – he’s not about to reveal a long-suppressed love of edgy electronica.
So it’s all checked shirts and rolled-up sleeves as the band pump out the predictable chord changes, anthemic choruses and messages of hope. If your dream is to be transported to an Asbury Park bar circa 1975, this will prove catnip to you. Of all his obvious heroes, Wilson’s voice perhaps most closely resembles Bruce-buddy Southside Johnny, and he sings with emotive conviction throughout, trying his level best to breathe vigour into even his most clichéd couplets. He’s “hiding in the alley just a-waiting for glory” while “Billy is a silhouette and Jeannie is a shadow / Billy’s got a magpie’s eye, Jeannie’s like a sparrow”. Sometimes it feels like Danny’s swallowed the collected works of John Mellencamp and sleeps under a Born in the USA duvet cover.
The opener Ghosts in the Wire uses a restrained, baited-breath rhythm to create an attractive suspense, while the (almost) title-track adopts something of the bouncy fervour of Eddie and the Hot Rods’ Do Anything You Wanna Do. If the album then settles into bog-standard bloke-orientated pub-rock, it’s always true to itself and its ideals. Like the back catalogues of Nick Lowe and Graham Parker, it strives to make virtues of its second-hand charms. “Authenticity” is ensured by the involvement of Tony Poole as producer (once guitarist with mid-70s band Starry-Eyed and Laughing) and mixer Ted Hutt (who’s worked with The Gaslight Anthem). It’s all, of course, unchallenging, with You Don’t Know even echoing Rick Springfield’s Jessie’s Girl. As its refrain chimes, its “heart is in the right place”, even if its calendar isn’t.
— Chris Roberts
Ghosts In The Wire
Heart And Arrow
Soul In The City
Colonel And The King
Brothers In The Night
Too Tough To Cry
Every Beat In My Heart
Can’t Hold Back
On The Street
You Don’t Know (My Heart Is In The Right Place)
Walk With Me
Email:
info@silvascreen.co.uk