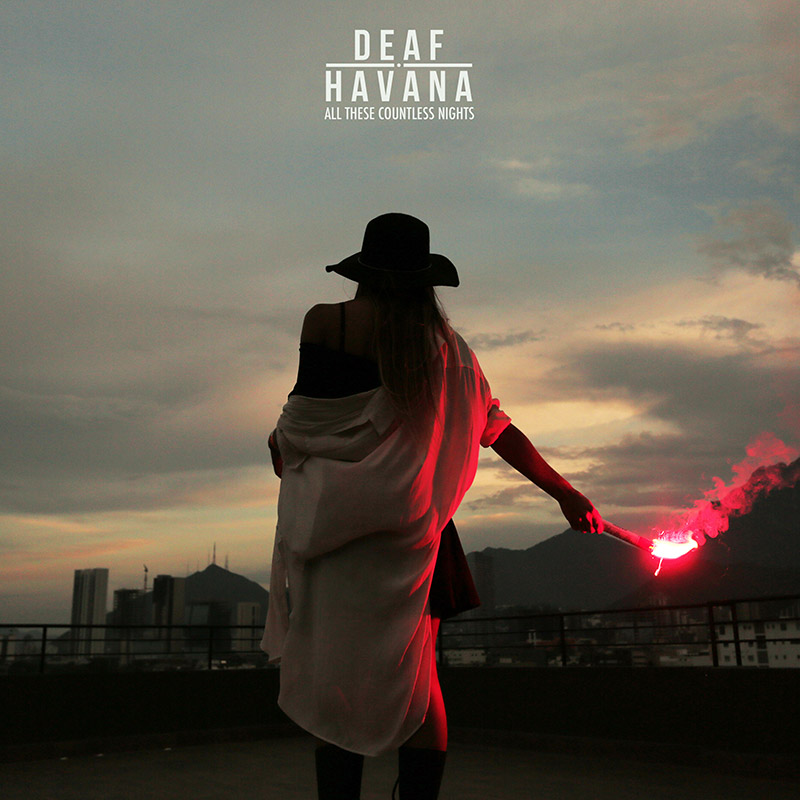 LABEL: SO RECORDINGS / SILVA SCREEN RECORDS
Amazon
Apple Music
Spotify
“We’re going to sing like we mean it, ‘cos I mean it this time,” sings James Veck-Gilodi on Deaf Havana’s earth-shakingly awesome new single, Sing. “I know I took you for granted but I hope I can change my mind…”
Sing is the sound of a band channelling three years of frustration into the biggest, boldest statement of their career so far. It takes all of Deaf Havana’s traditional qualities – soaring melodies, witty lyrics, an uncanny ability to make an emotional connection with rock’s heartland audience – and bolts on a riff so monstrous you can already hear this summer’s festival crowds going crazy for it.
That riff – which Veck-Gilodi says came from him subconsciously tapping into his inner Smashing Pumpkin – began as a fun doodle in rehearsals. Although the frontman initially thought it was too heavy to ever work in a DH song, he soon realised the band needed to expand its horizons.
2013’s brilliant Old Souls album had successfully catapulted the band into the UK rock big league. It crashed into the Top 10 of the Albums Chart, earned rave reviews for its bravura songwriting and saw the band sell out ever bigger venues, appear higher up the bill at festivals and even support Veck-Gilodi’s hero, Bruce Springsteen.
“It made us feel like a proper band,” says Veck-Gilodi, after Deaf Havana’s many years on the fringes of the scene. “It stepped away from that emo-y world; there were a lot more layers to it and the songwriting was much more mature.”
But, behind the scenes, the band were experiencing financial problems and a lack of internal communication that almost broke them.
“I was very close to quitting,” says Veck-Gilodi, who even launched an acoustic solo career in conjunction with multi-instrumentalist Deaf Havana bandmate Max Britton as a back-up plan. “Basically, I didn’t want to be in the band anymore.”
Veck-Gilodi planned to use the band’s 2014 Reading & Leeds performance to pay off the band’s debts and act as its swansong. But some sideshows reminded him of how much he – and Deaf Havana’s still-burgeoning fanbase – enjoyed his band. A sudden burst of inspired songwriting followed – “It’s probably the most creative I’ve ever been,” he says – but these weren’t just regular DH songs. Anthems such as Trigger and Seattle demanded that he and his bandmates – Britton, bassist Lee Wilson, drummer Tom Ogden and Veck-Gilodi’s guitarist brother, Matthew – strike out for new sonic territory.
The end result, Veck-Gilodi declares, is Deaf Havana’s most eclectic and expansive album yet.
“This album needs to take us to a higher level,” asserts Veck-Gilodi. “Not necessarily in terms of chart positions, because I don’t care about that. I just can’t wait for people to hear the album. We appreciate the fact that everyone’s waited this out with us. It’s going to be great.”
Because, this time around, Deaf Havana don’t just mean it, they mean business too.
Tracklist:
1. Ashes, Ashes
2. Trigger
3. L.O.V.E.
4. Happiness
5. Fever
6. Like A Ghost
7. Pretty Low
8. England
9. Seattle
10. St. Paul’s
11. Sing
12. Pensacola, 2013
Bonus Tracks
13. Cassiopeia
14. Anemophobia Part II
Email:
info@silvascreen.co.uk