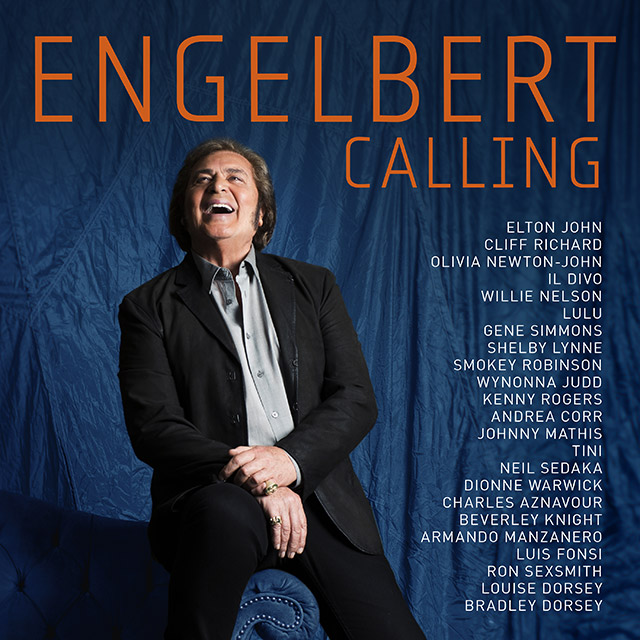 ‘Engelbert Calling’ is the legend Engelbert Humperdinck’s 80th album and comes over half a decade after his number one single and signature tune, ‘Please Release Me’. Featuring brand new recordings of classic tracks with some of the biggest and best voices on the planet, all handpicked by the legendary singer himself, this is an album that celebrates both an incredible career and all that is best in music. With guest stars including Sir Elton John, Smokey Robinson, Dionne Warwick, Willie Nelson, Lulu, Olivia Newton-John, Sir Cliff Richard and even Gene Simmons, this is a collection that confounds expectations, and then surpasses them! Between them the performers on ‘Engelbert Calling’ have sold over 1,500,000,000 albums [yes, that’s one and a half billion]!
The sessions for this album were an untold pleasure for all involved and, from the minute Engelbert opened up his black book of contacts, the music and inspiration flowed. Engelbert said of the project, “I am truly thrilled to be working with some of the greats of showbusiness and am honoured that the likes of Sir Elton have contributed to this album. I had an absolute blast recording and measuring tongue sizes with Gene Simmons. He won – just. It’s been a labour of love and I’m truly proud of how it’s turned out”.

An anecdote from Sir Elton John was behind the name of the album, and this fellow music legend paired up with Engelbert to deliver an incredible version of ‘Something About The Way You Look Tonight’. He commented of Engelbert, “One of the sweetest and nicest people I have ever worked with. We had great time singing together and he is so quick, what I call a ‘one-take singer’. 76 years old and still sounding as good as ever”. Gene Simmons features on a barnstorming ‘Spinning Wheel’ and said simply, “The Hump rocks!!! Wanna see how it’s done? Let Engelbert Humperdinck show you.” Sir Cliff Richard added, “I have always thought that Engelbert has one of the best voices in our business. I was thrilled that he asked me to sing with him on his new album and I wish him the very best of luck with it.”
Neil Sedaka said, “I have always loved Engelbert Humperdinck. His voice is as magnificent as ever. I am quite honoured that he has included ‘The Hungry Years’ on his new album. He first sang it for me at Davy Jones’ Memorial service and I’m thrilled with the outcome of the record.” Olivia Newton-John said, “Engelbert’s voice is sounding better than he ever did!!! Had such fun singing this duet with him”.
‘Engelbert Calling’ is more than a great collection of great songs. It is a vital set brought to life by one of the true greats of music. Produced by Martin Terefe [Jason Mraz, Cat Stevens (Yusuf), Jamie Cullum, James Morrison] this is an album that is truly contemporary and classic. Engelbert is a star like no other; stand by the phone, it’s time to get connected.

1. Something About The Way You Look Tonight (with Elton John)
2. Since I Lost My Baby (with Cliff Richard)
3. Never Never Never (with Olivia Newton-John)
4. Spanish Eyes (with Il Divo)
5. Make You Feel My Love (with Willie Nelson)
6. I Need You Now (with Lulu)
7. Spinning Wheel (with Gene Simmons)
8. Real Love (with Shelby Lynne)
9. You’ve Really Got A Hold On Me (with Smokey Robinson)
10. Release Me (with Wynonna Judd)
11. She Believes In Me (with Kenny Rogers)
12. Ain’t That Peculiar (with Andrea Corr)
13. A Certain Smile (with Johnny Mathis)
14. Kiss Me Honey (with Tini)
15. The Hungry Years (with Neil Sedaka)
16. It Matters To Me (with Dionne Warwick)
17. She (with Charles Aznavour)
18. After The Lovin’ (with Beverley Knight)
19. It’s Impossible/Somos Novios (with Armando Manzanero)
20. Quien Te Dijo Eso (with Luis Fonsi)
21. Something To Hold On To (with Ron Sexsmith)
22. Better (with Louise Dorsey)
23. Father And Son (with Bradley Dorsey)