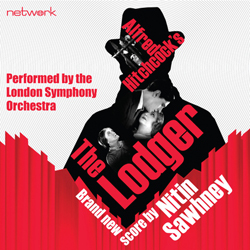 Nitin Sawhney is an Indian-British musician, producer and composer. His critically acclaimed work combines Asian and other worldwide influences with elements of jazz and electronica. His nine studio albums have won fifteen major international awards.
“I always hoped to follow in the footsteps of the great Hitchcock composer, Bernard Herrmann. He has been one of my major heroes and influences since I was a kid. What I find amusing is that, since I am scoring a silent Hitchcock film from 1927, Bernard Herrmann will now posthumously follow in my footsteps instead! As a long serving judge for the Ivor Novello awards I was delighted to be scoring the one Hitchcock film that features Ivor Novello himself.” Nitin Sawhney
1 Titles
2 Golden Avenger
3 Witness
4 Witness Part 2
5 Joker
6 The Press
7 Girl’s Dressing Room
8 Dressing Room Jokes
9 Daisy Fashion Model
10 Dad Brings News
11 Daisy Comes Home
12 The Lodger Arrives
13 The Lodger Theme
14 Daisy’s Song
15 Policeman Daisy
16 Girl’s Dressing Room Again
17 The Lodger on the Stairs
18 Landlady Searching
19 Tension between Lodger and Policeman
20 Speculation
21 Daisy At Fashion Show
22 Father Is Not Having It
23 The Lodger In The Bath
24 Landlady Worried For Daisy
25 Fight Over Daisy
26 The Big Love Theme
27 Evidence Against The Lodger
28 Lodger Makes A Break
29 Daisy Goes To The Lodger
30 Sister’s Death
31 Mother’s Wish
32 Daisy Understands And Consoles
33 The Mob
34 The Lodger Saved
35 The Big Happy Ending
36 Credits
Email:
info@silvascreen.co.uk