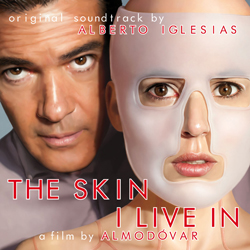 Pedro Almodóvar’s new Spanish thriller, “The Skin I Live In”, is due to be released on the 26th August. The soundtrack to accompany the film has been composed by Alberto Iglesias and released by Quartet Records with an exclusive digital distribution by Silva Screen Records.

Early in his musical career, Iglesias formed a duo with fellow composer Javier Navarrete creating electronic music, touring and performing from 1981 to 1986. This spark for creative and unconventional techniques would come to characterise Iglesias’ later work.  An initial collaboration with Spanish director Almodóvar on “Todo Sobre Mi Madre” in 1999, marked the beginning of a long and fruitful partnership which confirmed Iglesias as an internationally recognised composer of film music. Iglesias has since been nominated for an Academy Award for his work in the film “The Constant Gardener” (2005) and again for his work in “The Kite Runner” (2007).

‘In the film’s most beautiful marriage of sight with the escalating sounds of Alberto Iglesias’ Vivaldi-influenced soundtrack, Vera shreds her clothes before sucking them up in a bizarre vacuum; an escape bid is also pulse-quickening. Jazzy songs from flamenco fusion artist Concha Buika add melancholy to a late tragic interlude.’