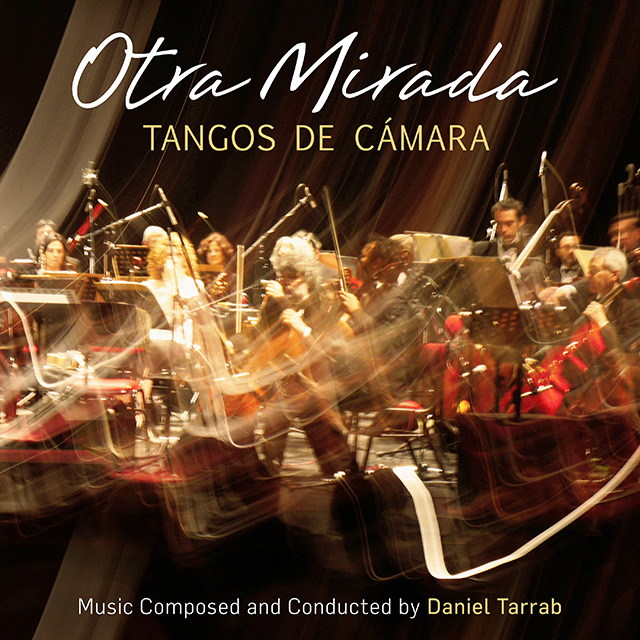 OTRA MIRADA (ANOTHER LOOK)
From Award Winning film composer Daniel Tarrab, comes a fresh and innovative, jazz-influenced, Tango album.
Performed by Nestor Marconi (Bandoneon), Pablo Agri (Violin), Daniel Tarrab (Piano / Contrabass) and string orchestra comprised from the members of Orquesta Filarmonica Nacional.
Aptly naming the album Otra Mirada (Another Look), Tarrab carefully avoids the powerful musical influence of the unforgettable Piazzolla. Composing 8 original Tangos in song format and preserving the passion of the style, Tarrab is also bringing in the influence of Jazz through harmonies. His dramatic, modern interpretation of Tango stems from the music form’s constant evolution. As observed by John Pareles of the New York Times in the year 2000 – “Jazz and tango have parallel histories. Both came out of the slums and the underworld, were denounced as salacious and were then embraced as dance music. Both moved from clubs to concert halls, evolving into more ambitious forms. Both conjure romance, exhilaration and tension; both use improvisation. Yet they are as different as Argentina and the United States. Tango has a European formality and a sense of tragedy; jazz prefers openness and a sense of humor, the underlying optimism that lets the blues transcend hard times. Still, it was inevitable that jazz and tango would meet”.
In the spirit of cosmopolitanism, Otra Mirada is written as concert music that is open to improvisation and local influences. The Worldwide tour will feature the original trio backed by local string orchestras, bringing vernacular flavour to the Buenos Aires Tango. Presently, Tango is experiencing a revival in Japan, Korea, Germany, France, Finland, countries far from Argentina.

Daniel Tarrab was born in Buenos Aires, Argentina. Studying Music Composition at the Catholic University of Argentina (UCA) and Film Composition at The Berklee College of Music, in Boston, Massachusetts (USA). In the 2000s Daniel established himself as a film composer. Known for the Broken Silence Series (produced by Steven Spielberg in 2002) and The Whore and the Whale (2004), in 2007 Tarrab won the World Soundtrack Awards Discovery of the year for the Cannes Film awarded XXY. He is also a recipient of several other awards from the Academy of film of Argentina-Gran premio SADAIC for Film Music (society of Argentinean Composers).

One of the great musicians of the 70s, Nestor Marconi is a leading player of the bandoneón, the small accordion-like instrument that is a prominent part of the traditional sound of the Argentine tango. Since the 90s, he has joined the international classical music circuit as a soloist performing pieces from the bandoneon and orchestra repertoire such as the ‘Concert by Bandoneón’ or the ‘Tres Tangos’ by Astor PIazzolla. Appearing on the stages throughout Europe and USA, as well as at the Teatro Colón in Buenos Aires and has performed with leading classical music artists Gidon Kremer, Daniel Barenboim, Yo-Yo Ma, and Charles Dutoit on Tango cross-over projects. Currently, Marconi is the leader of his own tango trio with Leonardo Marconi on piano and Oscar Giunta on bass.

Son of Antonio Agri, Pablo Agri, like his father is a leading violinist of the Tango genre. Focusing early on classical violin studies, Pablo developed his own style. He has been a member of the National Symphony Orchestra since 1992, he took classes with maestro Szymsia Bajour and was awarded a scholarship by the Antorchas Foundation to study at the Conservatorio Edgard Varese, in France, with maestro Ami Flammer, obtaining the Premier Prix in July 1997. Also having worked with the best Tango musicians, from Mariano Mores to Horacio Salgán through Néstor Marconi, Susana Rinaldi and Osvaldo Berlingieri.
1. Prelude
2. La Lamparita
3. Abril
4. Encuentro
5. El Quinto
6. Entrelineas
7. En La Cornisa
8. La Lamparita (Reprise)